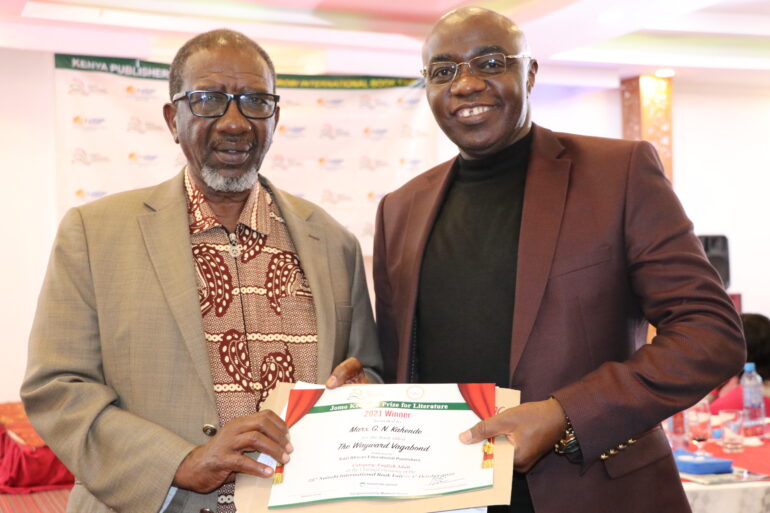 Marx Kahende (Left), whose book The Wayward Vagabond won the Jomo Kenyatta Prize for Literature, in the English Adult category, pictured with his publisher Kiarie Kamau, the MD of EAEP
BooksEventsIssuesNewspublishing

Marx Kahende, a retired diplomat and Ngugi wa Thiong’o’s son, Nducu, are among the winners of the Jomo Kenyatta Prize for Literature.

The awards ceremony, organised by the Kenya Publishers Association, was held on Saturday evening at the Pride Inn Hotel, in Westlands, at the tail-end of the Nairobi International Book Fair.

Samuel Wachira, a Catholic priest based in Meru won the Wahome Mutahi Literary Prize with his book, Hustlers’ Chains, published by One Planet Publishers.

The winner in the Kiswahili children’s category was Fumbo la Watamu by Ali Attas, published by One Planet.

During the event, Prof Laban Ayiro, the Daystar Universtity Vice-Chancellor, who was the chief guest, challenged Kenyans to embrace the culture of reading if they hoped to become good leaders. He emphasised that reading is a prerequisite to good leadership. He also decried the poor reading habits exhibited by the younger generation and majority of leaders across all sectors.

Kiarie Kamau, the chairman of Kenya Publishers Association (KPA) spoke about the supremacy Kenyan publishing. “We are increasingly becoming a force to reckon with in the area of Publishing in Africa and beyond,” said Kamu, who is also the managing director of EAEP. “We sit on the Executive Committees of the International Publishers Association as well as the African Publishers Network. We publish high quality and wide range of general reading materials, most of which serve a global audience. We are already visible on the digital publishing and online selling space … the two literary awards demonstrate that indeed Publishing in Kenya has come of age.”