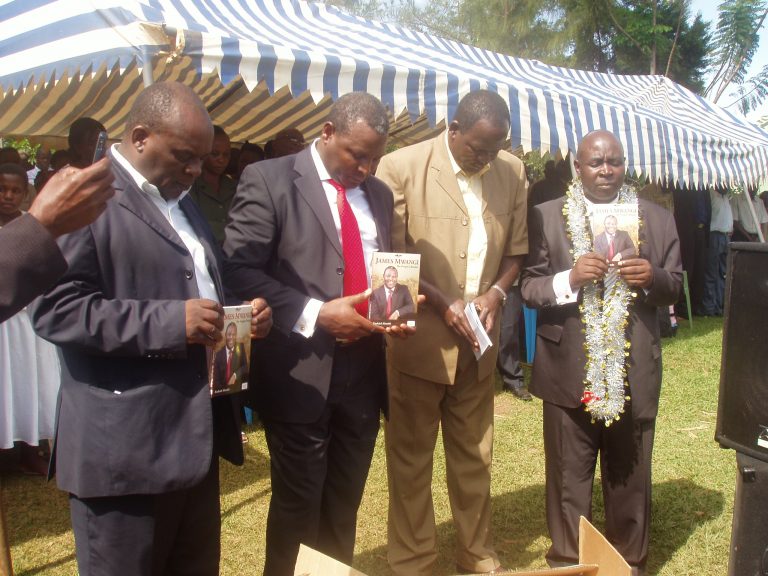 Dr Alembi, (right) during the launch of his book The People's Banker In Bunyore on December 19, 2009. James Mwangi is third from right. This was Daktari's last public function
IssuesNewsPersonalities

Saturday, January 16, and I am relaxing in the house minding my business, when at around 7.40 pm a text message bursts into my phone. “Ati Alembi is dead?” Was the terse message from a colleague in the office. WHAT! This can’t be! I say to myself reading the message again. Dr Ezekiel Alembi had been admitted at the Mater Hospital on Tuesday, January 12, in critical condition. I hadn’t gone to the hospital as I was waiting for him get out of ICU, that way I reasoned I would be able to chat with him, and maybe joke him out of getting off the damn hospital bed. I suddenly remembered that heavy rains had prevented me from a new year’s party he had invited me at his house in Kahawa West. You see Daktari was very faithful and generous to his friends – Yes, I considered myself his friend – and would occasionally throw parties at his house. These parties were occasions where daktari and his friends ate a lot of food and drank a lot of tea – it was always tea, and maybe juice or soda – told stories and jokes and generally laughed at levels that would not amuse the chaps at NEMA. Daktari had his seat facing the rest of the people in the living room. Actually, it was a three-sitter, which he occupied all alone, er and his many books and papers. That was his office in the house. The mass of books and papers had a clattered disorderly look about them. “You know there is order in disorder,” Daktari would defend the state of his ‘office’. “I know where I have put each and every item, and it will not take me a second to retrieve it. But if someone arranges them I will have a hectic time finding things.” His explanation made perfect sense to me. Before I got married, my house had a very disorderly look about it, but then it was convenient for me as I knew where each and every item was, even in the dark. Enter the missus and the house became very clean, neat and ordered. Problem is that I have to keep asking where everything is… I am not complaining though By failing to attend the party, I missed the opportunity to be with Daktari for probably the last time. It turned out to be the last time he shared a meal with his friends, more like the last supper, because I am told the earliest person left his house at 8pm, for what was supposed to be ‘lunch’. He called me twice after that to tell me how much fun I had missed. Oh how I really missed! But then I comforted myself with the thought that from December 18 to 20, which by the way, is less than a month before his death, I was with Daktari at his rural Ebwiranyi home, in Western Province. It had been an occasion to launch his latest book, James Mwangi: The People’s Banker. I think this was book number 40, authored by the man. Now you see why he is so important.

However, during our time in Ebwiranyi, I could tell that Daktari was unwell. He got exhausted quite often. During other times he would excuse himself saying that he needed to rest as his blood pressure was giving him trouble. It was really sad to see Daktari reduced to such a weakling. The Daktari I knew was a bundle of energy waiting to be unleashed into the various projects he undertook with so much vigour. At some point on the dinner table, and in the middle of a conversation, he just switched off and dozed off, for about five seconds. And when he came to he had this look about him that told me that all was not well with the good Daktari. Still, he put on a very brave face, in spite of all the pain and suffering – I was later told that he was in a really bad shape. During the event, Daktari with James Mwangi, the CEO of Equity Bank, launched the Ebwiranyi Community Library, in honour of his late parents Mzee Musa and Mama Selifa Alembi. He had build a brand new house, at the cost of around Sh700,000 – he told me this – to house the library. This got me thinking, why in the face of such suffering, would he insist on pulling off such a massive project, in such a hurry. Now, with the benefit of hand sight, I think Daktari had a premonition of his death, that he wanted to get the project out of the way before he passed on. Daktari was really keen on having well-wishers donate books to his library, and asked me for ideas. Luckily I had carried two copies of my book Henry Wanyoike: Victory Despite blindness, and promptly donated them to him. I guess the best way I can homour Daktari’s memory is by organising a campaign to have people donate books, the best way I know how. Despite being a very busy man, Daktari always had time for his friends. He would invite me for lunch at KU, where we really discussed many issues. Our lunches ended up being four to five hour affairs. And Daktari was a dramatic and funny man. I remember that whenever we went for lunch at the senior common room at KU, Daktari would feign annoyance on finding that there was no ugali on the menu. “I want real food! (ugali),” he would say. “I am not a bird to eat grains (rice).” To Daktari, nothing came before a good meal. “Aah Josefu, let us eat,” he would time and again me. “Why should we starve ourselves when there is food.” And I always daid amen to that. I think it was Unoka, Okwonkwo’s father, in Chinua Achebe’s Things Fall Apart, who said that whenever he saw the mouth of a dead man, he saw the folly of not eating what one had during his lifetime… I met Daktari sometime in 2001. Then I had started writing a column I called Book World, in the Sunday Standard. Then he was plain Mr Alembi, as he had not yet gotten his doctorate degree. It took him close to eight years to get his doctorate degree, and it was not for lack of effort. During that time he time and again presented his proposals to the vetting committees at Kenyatta University, and they always managed to frustrate him. During our many talks Daktari confided in me how these individuals, who shall remain unnamed for now, frustrated him to a point where he was on the verge of losing his teaching post at KU. Then KU administration issued a circular to the effect that lecturers who did not hold doctorate degree would lose their jobs. And this was precisely the point when his tormentors had upped their tempo in frustrating my poor guy. At some point his salary was suspended, and for someone with a young family, this was really cruel. Meanwhile he had to think fast. He registered for his doctorate at the University of Helsinki in Finland, which he got in 2002. Yet this is the same person who went on to head the Literature Department at KU. This goes to prove that you cannot put a good man down. At the time of his death Daktari was the director of KU Radio services.

You fought a good fight.