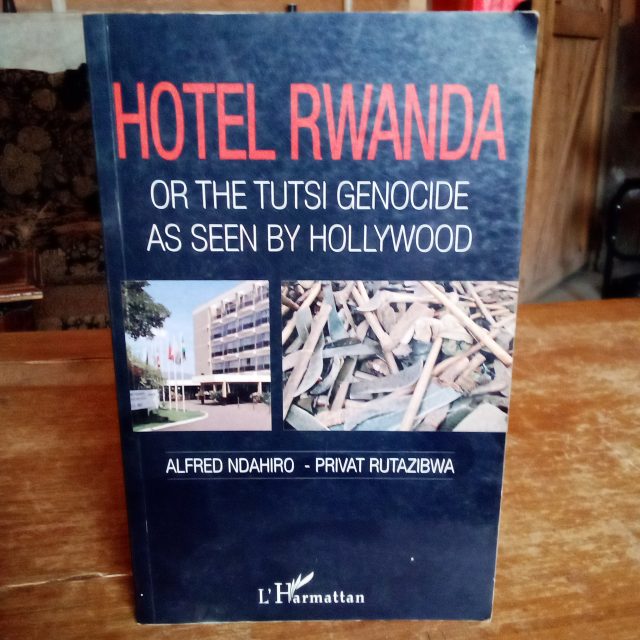 Sometime in May 2008, I was in a team of East African journalists that flew to Kigali to attend a book launch. The launch took place at the Hotel des Mille Collines, made popular by the movie, Hotel Rwanda, which earned American actor Don Cheadle, an Oscar nomination.

In the movie, Cheadle portrayed Paul Rusesabagina who, at the time of the Rwandan genocide, was the manager of Hotel des Mille Collines, in Kigali and was said to have hosted hundreds of Tutsis in the hotel, thereby saving them from the marauding Hutu Interahamwe militia, who masterminded the Rwandan genocide.

Hotel Rwanda is based on Rusesabagina’s book titled An Ordinary Man.

One might have thought that the Rwandan regime was mightily pleased by the Hollywood production for putting the country on the world map. On the contrary, and as we later came to learn, Rwandan president Paul Kagame wanted nothing to do with the movie; he charges that the movie ‘manufactured a hero’ in the name of Rusesabagina.

And that explained why we had been flown to Kigali to attend the launch of a book titled Hotel Rwanda: Or the Tutsi Genocide as seen by Hollywood, co-authored by Alfred Ndahiro and Privat Rutazibwa. At the time of the launch, Ndahiro was a senior advisor in the office of the president in Rwanda.

The book goes to great lengths to depict Rusesabagina as an opportunist who milked the outpouring of sympathy for the genocide victims to tell the story of how he helped save Tutsis from the hands of Murderous Hutus.

Contrary to Rusesabagina’s portrayal in the movie, the book is filled with testimonies of how Rusesabagina harassed those in the hotel for payment and threatened to throw out those who did not have money.
“Many other Rwandans who took refuge in the hotel have publicly declared that the heroic acts attributed to the character of the film bear no resemblance to the reality of events there over that three-month period,” says the book.
It adds: “it should also be pointed out that the hotel manager, unlike the saviour portrayed in the film, initially prevented the refugees from procuring food from the Red Cross because he preferred to sell them the hotel supplies.”

Among other forms of evidence the book reproduces a copy of fax sent to Rusesabagina, from the hotel owners in Belgium, instructing him not to charge for food that had been acquired for free.
In the movie Rusesabagina is depicted as a resourceful person, who persuades the architects of the genocide to spare the refugees by bribing them with cigars, alcohol and a little money.
“… General Bizimungu and his cohorts were not poor wretches that could be bribed with goodies…they were the cream of the genocidaires, that is, hardened killers with everything they could desire at their disposal, who had the power of life and death over almost everyone,” writes the authors.

In any case, the book argues that these genocide plotters were Rusesabagina’s friends, and that they would constantly drop in at the hotel for refreshments. It adds that through his ‘useful’ contacts with Georges Rutaganda, the Interahamwe vice-president, Rusesabagina was able to have a steady supply of alcohol at the hotel. “Not surprisingly, the senior officers of the Rwandan Armed Forces needed a quiet, safe place where they could quench their thirst and organise their next move after a killing spree,” says the book.
However, in his book Shake Hands with the Devil, LGen Romeo Dallaire, who led the United Nations forces in Rwanda (UNAMIR) acknowledges that Rusesabagina’s act of giving alcohol to the genocidaires contributed in a small way in saving the refugees in that hotel.

It should also be recalled that Rusesabagina’s wife, a Tutsi, and their children were also camped at the hotel, thus he had an obligation, if only to his family, to ensure that Tutsis in that hotel were out of harm’s way.
If as the book claims that Rusesabagina did not save the refugees from the genocide plotters who used to frequent the hotel, then how come these people did not come under attack?
Among other things the book owes the people’s safety to the UNAMIR, the United Nations peace keepers in Rwanda. It also says that expatriates, UN and other NGOs personnel, as well as international journalists were housed there, “which was enough to deter would-be murders from the wholesale massacres that were going on in the rest of the country.”

Rusesabagina’s credibility was dealt a further blow when Valerie Bemeriki, who was a presenter with the infamous Radio Television Libre des Mille Collines, (RTLM) and who is currently serving a life sentence at the Nyarugenge prison, for her role in the genocide, told researchers for the book that Rusesabagina used to pass on names to RTLM. “…I also know that if you reported anyone, like I used to do on radio…you put them on death row. That’s what he (Rusesabagina) used to do; he gave us the names we broadcast on RTLM,” Bameriki is quoted as saying.

It would appear that authors of the book put in quite some work in researching for the book. They even unearthed information to the effect that Rusesabagina at some point, while still working Hotel Mille Collines, in the early ‘90s, used to spy on Tutsis for the Rwandan Intelligence services.
And in what appears to be an obsession with the man, they have traced his every move. They are well aware that Rusesabagina formed the Hotel Rwanda Rusesabagina Foundation (HRRF), and whose registered directors are Rusesabagina, his wife and his two sons-in-law.

The authors also know that all the monies raised by the foundation actually goes into Rusesabagina’s personal account. They add that “he used his newly-acquired fame, thanks to Hollywood to indulge in petty politicking that exposed his ethnic and revisionist tendencies.”

Hotel Rwanda had the effect of turning Rusesabagina into a global hero. In 2005, former US president George W. Bush, awarded him the Presidential Medal of Freedom, the highest civilian honour in the US.

Rusesabagina, 67 later turned into a harsh critic of the Rwandan regime and President Paul Kagame. He was arrested in August 2020 in what he described as a kidnapping from Dubai by Rwandan authorities.

He was accused of supporting an armed wing of his opposition political platform, the Rwandan Movement for Democratic Change. The group had claimed some responsibility for attacks in 2018 and 2019 in the south of the country in which nine Rwandans died.

Rusesabagina was yesterday jailed for 25 years, on terrorism related charges, by a Rwandan court.

Perhaps, because of the subsequent negative publicity surrounding Rusesabagina, Terry George, the director of Hotel Rwanda, writing in The Washington Post in May 2006, said that Hotel Rwanda 2 “is a sequel I never want to make.”