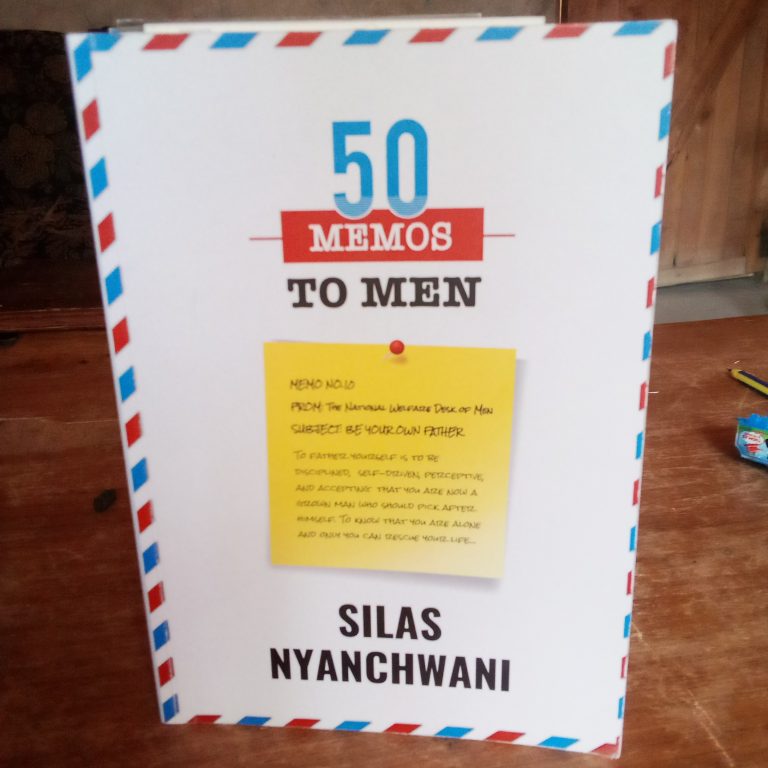 Growing up in the village, you would occasionally overhear grown-ups say things like: “Huyu mtoto ni mwerevu kuliko miaka yake.” This was often in reference to youngsters perceived to be intelligent beyond their years.

Now that I am a certified elder, the above notion crosses my mind every time I read a post – mostly on Facebook – authored by Silas Nyanchwani. That is why whenever he makes an announcement to the effect that he has a book out, I want read what he has written.

His first offering Sexorcised, had some sections that left me blushing. While I can’t remember the last time I read a novel in the erotica genre, Nyanchwani proved that we have some hidden talent amongst us, wah!

I am here to talk, or rather, to write about 50 Memos to Men – his latest book – and I have been wondering to myself, where does the author get wisdom to talk about relationships so authoritatively? Isn’t this a case of mtoto kuwa mwerevu kuliko miaka yake?

Anyone who doesn’t know Nyanchwani, getting the chance to read Memos, would most likely assume that this the product of a greying man, with grey, bushy eyebrows, given to wearing frumpy sweaters, peering above horn-rimmed spectacles, balanced on the bridge of their nose.

First of all, how long has Nyanchwani been in the marriage institution, if at all he is married, for him to be dispensing such wisdom? Just the other day, Nyanchwani and I worked at The Nairobian, when the tabloid was flying off newsstands. Then, he was writing a column, whose content always rubbed the female gender the wrong way. Such was the controversy.

So where did he learn these things?

Then and now, I always marvelled at how, this quiet, soft-spoken young man courts controversy so effortlessly, like the time he attacked Mukimo – one of my favourite dishes – so badly, I think I trolled him on Facebook. Awachane na Mukimo kabisa.

After I finished reading Memos, I got away with the feeling that this can only be the product of careful observation of human behaviour. Everything he writes resonates deeply and ticks all the right boxes. We all have our fair share of relationships, hence reading the book is like walking into a room full of familiar faces. Whatever is written here, resonates so deeply at a personal level.

Talking about familiarity, well familiar faces come with different memories, not all of them good. Some can be downright traumatic like when one suffers a painful heartbreak (character development?) So, what is the advice for men who have suffered break-ups? “…once she tells you it is over, bro, don’t ever beg…nothing you will ever do will win her back,” says the book, adding. “When a woman breaks up with you, 99 per cent of the time, she has a backup plan.” Savage.

One thing I enjoy about Nyanchwani’s writing is that he gives it to you straight, like bitter, but effective medicine. Call it tough love, but Memos is not about babysitting grown men, who think the world waits for them to make up their minds. The kind of advice dispensed in this book is a bit like the child that rans to its father, eyes bawled up, from an altercation in the playground, only for the parent to give them a proper hiding; to man them up. Hakuna kubembeleza.

Nyanchwani has this unique ability to bring out, on paper, the things you only think about in the deep recesses of the mind; making it look so easy, yet packing them with so much sense. That, to me, is the sign of a good writer.

It is rather obvious why most women get exasperated by his writing; he almost always gives men ‘bad’ advice. Listen to this “…unless she is your mother or sister, don’t even give a woman money…my stingiest friends get laid more, or even get paid for their cabling services…trust me, men who treat women better hardly get anything good in return.” Hmm…

Isn’t it funny how he pummels women’s sensibilities, yet they keep coming for more. Well, that is what eloquent, persuasive writing does for you.

Still, his is not the blind, see-no-evil hear-no-evil, embrace of men. He calls them out when they do stupid things that hurt good women. Such men are afforded the worst contempt in the book. As a man, you do not want to be caught on the wrong side of his pen.

I have seen a number of social media personalities crown themselves the title ‘Men’s President’, but most are trash talking, bottom feeding online busybodies with nary in the way of brains. To me, Nyanchwani, with his smooth cerebral writing is more deserving of that title.

When I opened the book’s cover, I feared it would come out as the glue that did the binding appeared to have spilled over, however, after handling it for a number of times, the gluing seems to be just fine. And yes, I like the cover design; very creative.

Now, apart from a few typos here and there, which can be smoothened by a good editor, this is a book I highly recommend. I learnt a lot.

About being the tallest writer in Africa – I am short, so this cuts to the quick – I wonder, whom between Nyanchwani and Clifford Oluoch is shorter.