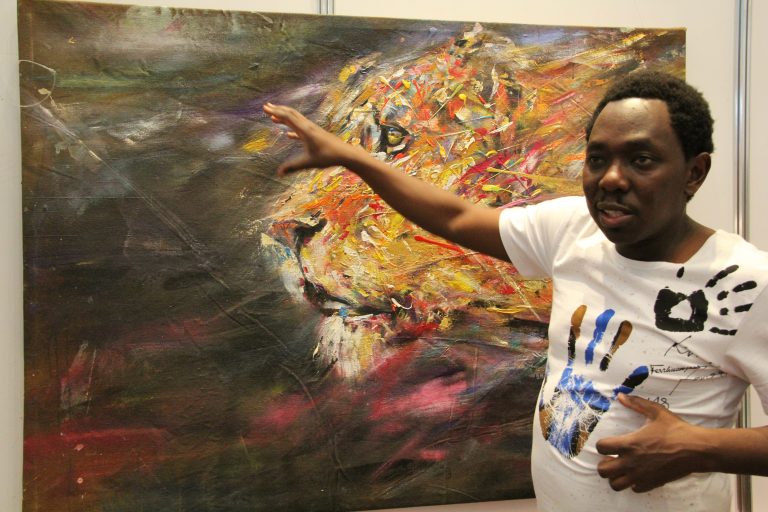 It is long since I last sat down with Adrian Nduma and the Covid restrictions were not helping matters. Being one of the top rated visual artists in Kenya, I have always been amazed by his works; they are so breathtakingly real.

The other day I went for a meeting in Karen and it occurred to me that this would be an ideal opportunity to hook up with Adrian; after all, his studio is situated in nearby Dagoreti Corner. I called him and he told me that he was on his way to Rongai and if I would call him when I was through with my meeting to see where he might be.

After my meeting, I called back and by coincidence, Adrian was in Karen. He asked me to join him at the Talisman Restaurant. When we met up, he put on a horrified face when I told him that it was my first time at the Talisman. “What! Tembea Kenya bana.” I had to defend myself saying that with ‘working from home’ I don’t get out much.

My main reason for meeting with Adrian was basically to touch base, and not necessarily discuss arty things – although you can never avoid that.

Once settled down and with our pots of tea on the table and the initial pleasantries done with, Adrian told me that he had gone to Rongai to supervise a project he is undertaking there. Our talk then drifted to construction, building materials and the rest, but he could not bring himself to discuss exactly what project he was undertaking and I did not press.

Would you, when you are enjoying specially brewed tea and exotic samosas at the Talisman? Me, I decided to enjoy the ambience and the piped music that was filtering through. On the walls, there were some art pieces and Adrian told me that an exhibition was currently ongoing.

The artist, whose works were on exhibition had used mixed media, including pieces of clothing on the canvas. This style reminded me of an artist named Kamicha; I wondered where he is today. He has been missing in action lately. Adrian, too, wasn’t aware of his whereabouts.

The Talisman is also an outlet for Adrian’s works and he has exhibited a number of his works there. Little wonder that he was quite at home there; the staff were passing over to say hi. You could also tell from the personalised service we got there.  He is some sort of a celeb there.

The Talisman has this cool, homely ambience about it. From the entrance, the establishment looks deceptively simple. There is a bright yellow vintage pick-up truck at right at entry, in spic spac condition. Now, this tells you people who patronise this place appreciate the finer things life has to offer.

This immediately manifests itself when you step inside. Well, not many establishments hold active art exhibitions, so that tells you the kind of clientele that frequents there. They are the sophisticated type.

Sophisticated does not necessarily mean wealthy – although you need to be rather well endowed to be able to appreciate FINE art. We have moneyed individuals in this country, whose idea of art is what their kids do with pencils and drawing books in school. I hope this gives you a rough idea of who frequents joints like the Talisman.

Inevitably, Adrian and I find ourselves talking about his art. He tells me that with the Covid restrictions, he’s mainly been involved with commission works, and which has kept him gainfully occupied.

Since his studio is within his residence, Adrian told me that there are times when inspiration strikes, forcing him to wake up in the dead of the night to work on his paints and brushes, to produce magic on a blank canvas.

“I work best with music playing in the background,” said Adrian, a former banker. And what is his favourite kind of music, I ask. “Well, I like all kinds of music as long it strikes the right chords in me,” he said, adding that he even finds certain genres of vernacular music appealing.

And on that musical note, I seized the opportunity to ask him a question I have always wanted to take up withhim; his uncanny resemblance to Gikuyu Benga artiste Kariuki Kiarutara. He smiled wanly and acknowledged that he has indeed been told of the resemblance a few times. “But looking at Kariuki’s pictures, he doesn’t have a moustache, unlike me,” he protested weakly.

He added that he gets spooked by people who look like him, but he promised to check out Kariuki’s music on Youtube, especially after I told him that his music packs heavy messages and is comparable to the late Joseph Kamaru.

Like all visual artistes worth their salt, Adrian is also an ardent art collector, including his own art. “I collect my art for posterity sake,” he said. “That forms part of my children’s inheritance. Once I feel that a particular piece of art should go into my collection, I simply roll it up and put it aside. It doesn’t get to be viewed.”

And while he has made a name courtesy of his diverse variety of art, the Lion series stands out as perhaps his signature. Before talking about the significance of the lion in his works, Adrian reclines back on his seat, takes a deep breath and with a far-away look, says that he cannot get enough of drawing the lion.

“It is not for nothing that lion is king of the jungle,” he says. “There is a lot of mystery surrounding it. Of all the animals I think it is the lion that comes closest to man, in terms of personality.”

As our conversation draws to a close, we agree that we should catch up more often.

PS: Did you know that in 2013 Adrian wanted to be the governor of Embu?