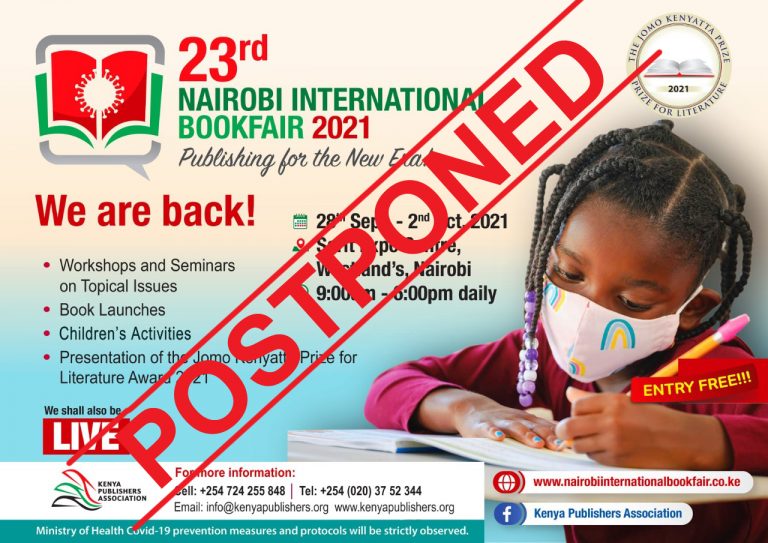 The 23rd edition of the Nairobi International Book Fair, which was scheduled to be held from September 28 to October 2, has been postponed indefinitely, as a way of prevention against Covid-19.

“After careful consultative discussions with key stakeholders, the KPA board agreed that the presidential directive issued on 18th August 2021, vide Public Order No. 5 on the Coronavirus pandemic suspending public gatherings and in-person meetings, be strictly adhered to and hence the board has postponed the book fair to a later date, notwithstanding the strict and meticulous Covid 19 protocols advanced by the Sarit Centre management,” reads a statement from the Kenya Publishers Association (KPA), who are the organisers of the Book Fair.

KPA, adds the statement, will inform book lovers on whether the Fair will be held at a later date. “Kenya Publishers Association is keen to make the Nairobi International Bookfair happen soon,” said KPA. “The board shall be watching the environment and ministry directives in order to communicate to the general public and potential exhibitors on the new book fair dates.”

Maisha Yetu understands that the decision to postpone the Fair was arrived at by holding consultations with stakeholders, including the Ministry of Education. Schools are also understood to have expressed reservations about busing in pupils to the Fair.

KPA only held a virtual book fair last year, when the whole country was put on very severe Covid lockdowns.

With Covid cases on the increase in the country, publishers have privately expressed fears that the Fair might be cancelled altogether. A looming cancellation would be a huge blow to the KPA secretariat, seeing the Fair is its main source of revenue, where exhibitors buy stands to showcase their wares.

Individual publishers are crossing their collective fingers, hoping that the Covid situation improves, as the Fair is the venue through which they seal book deals with various institutions, for them to purchase books.

Also hanging in the balance is the announcement of the Jomo Kenyatta Prize for Literature, which is awarded after every two years. However, the judging process of the manuscripts is on-going and nominees will soon be announced. It is hoped that winners will be announced when the new dates of the Fair are made public.

Still, KPA has made arrangements for the Fair to be hosted virtually, even when the new dates are announced.

“Please also note that once the date is set the Bookfair will still be blended (both in person and virtual),” adds the KPA statement.

The Book Fair is held on annual basis at the Sarit Center in Westlands.