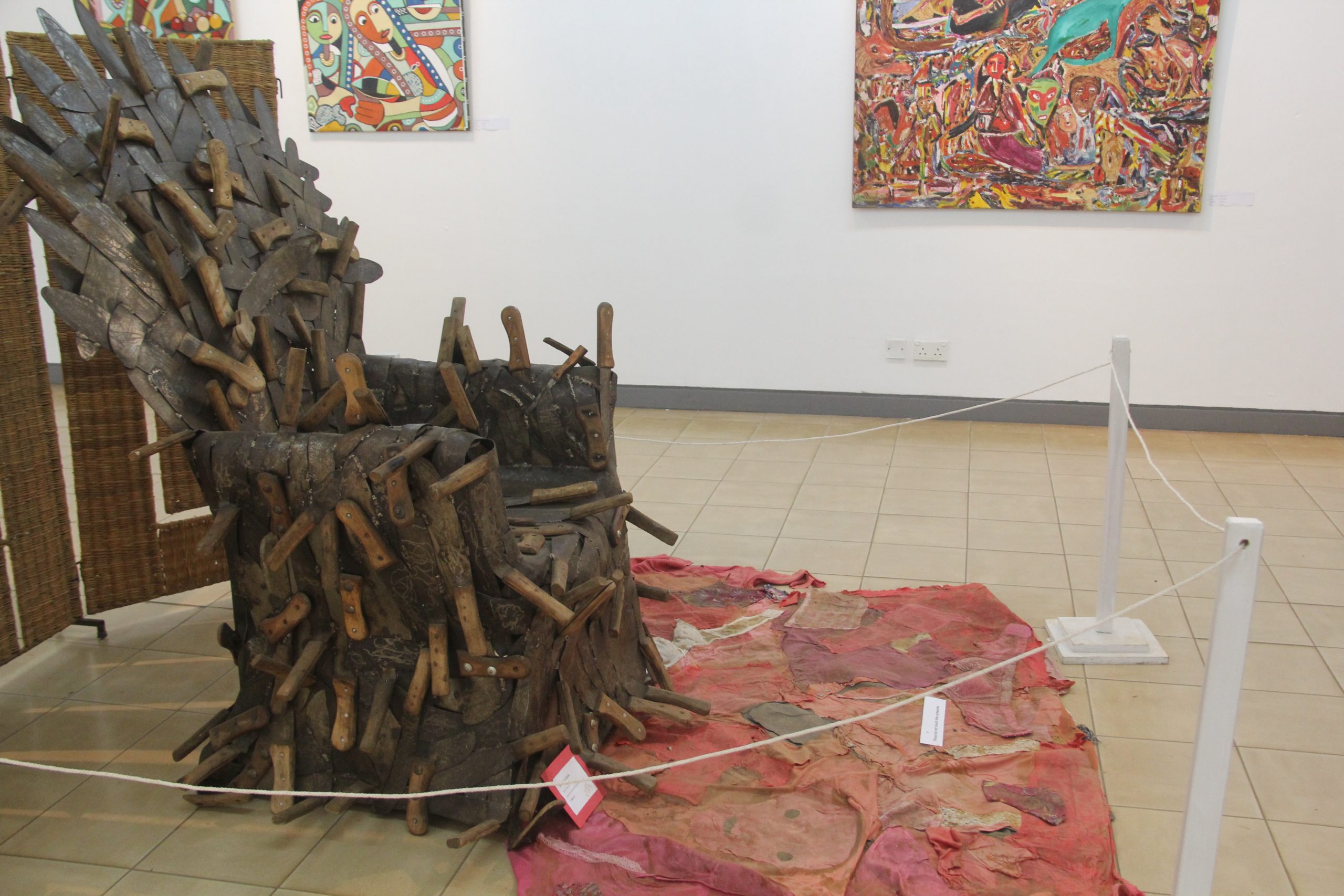 The highly acclaimed TV drama Game of Thrones might be on its last stretch but it would appear that it has left a mark on Kenyan audiences. In the drama series there is an Iron Throne that every person, who thinks they have leadership blood in them, wants to occupy.

The throne is forged out of many swords said to have been melted by fiery dragon breath. Now, the quest to occupy this throne leads to a lot of bloodletting. Closer home, Sebastian Kiarie, a visual artiste from Ngecha Village in Kiambu County has come up with his local version of the Iron Throne. 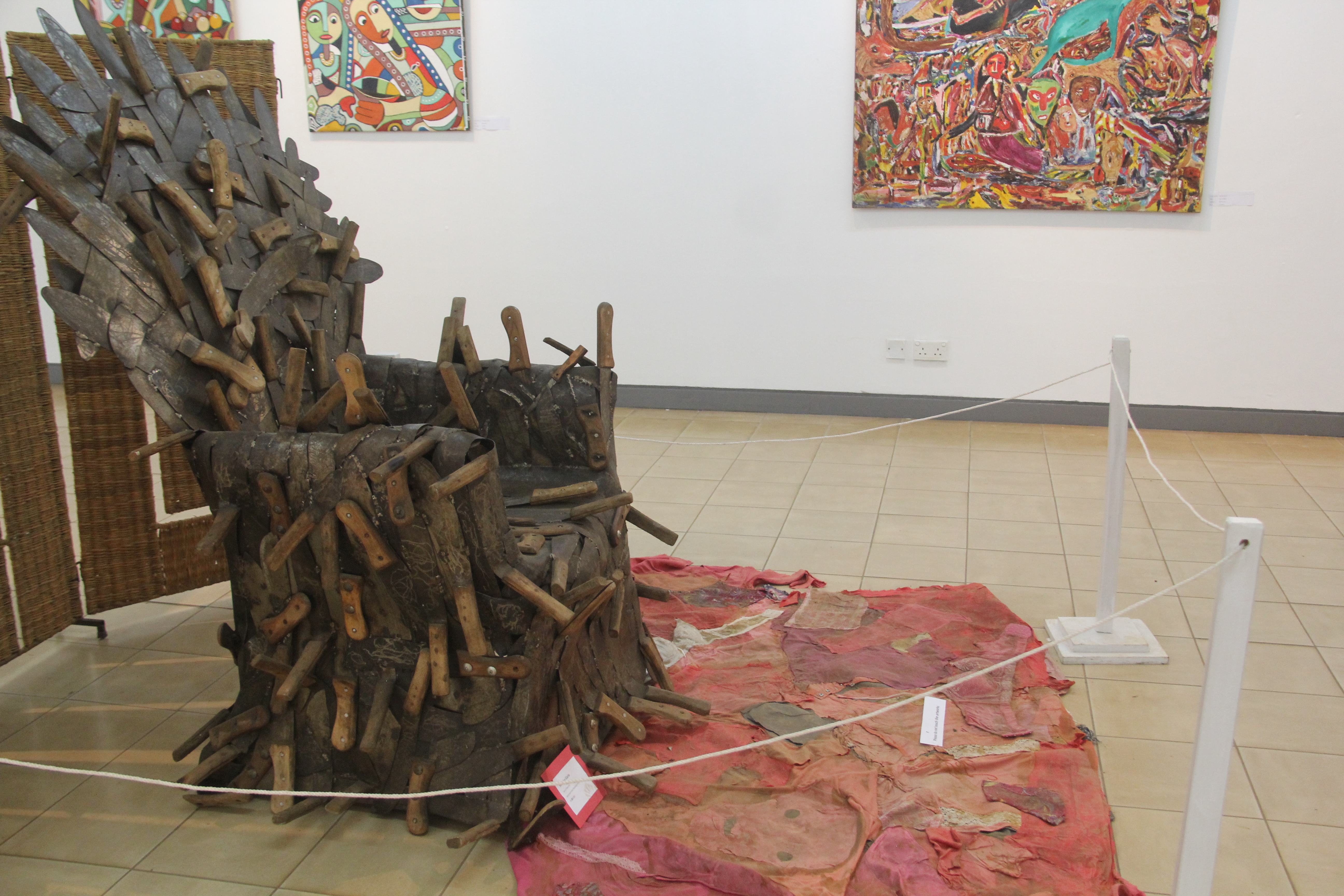 Like the throne on King’s Landing, Kiarie’s throne is made up of hundreds of machetes. He calls it The Seat of Impunity. The image is, at once, terrifying. This is especially when one takes into consideration Kenya’s blood soaked election cycles. Starting with 1992, the machete or panga became the weapon of choice for politically inspired ethnic clashes during election time.

Kiarie’s sculpture is thus a timely reminder of the deadly nature of our politics, where politicians will do anything, including shedding blood in order to get into power. These politicians are encouraged by the fact that they will get away with it. In short, the top political seat in Kenya is drenched in blood.  This is the impunity Kiarie addresses in his unique sculpture.

Seat of Impunity is among artworks that have been on display, at the National Museums of Kenya (NMK) since the beginning of this month. Titled Art Creative and Beyond, this is a joint exhibition by artists drawn from Ngecha Village. This village has been made popular by the large number of self taught artists who have left a mark, nationally and even internationally.

This is a village where everyone knows someone who is an artist. Besides, Ngecha could well be the only village in Kenya with two active art galleries. Some of the popular names from Ngecha include, Brush Wanyu, Sane Wadu, Shine Tani, Chain Muhandi, among others. 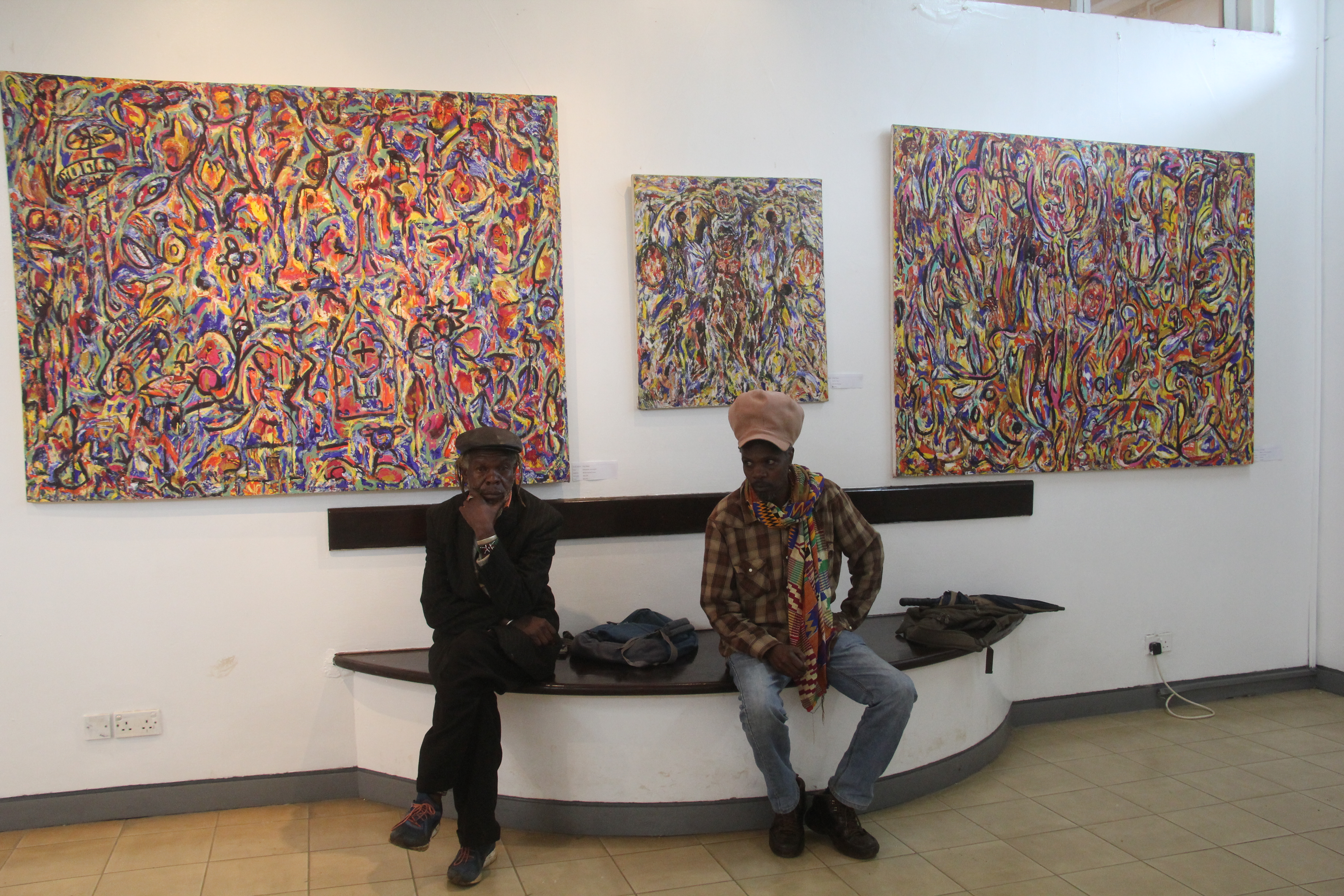 Artists are said to be mirrors of society and true to type, the artistes from Ngecha have not shied away from happenings in society including politics. Still on the topic of violence and impunity, Brush Wanyu has a painting that depicts the violence that took place in Mpeketoni, Lamu County, a few years ago, that resulted in the death of a number of people.

The explanation given to Kenyans on those killings was that it was the work of terrorists, but Brush is unconvinced. “This is impunity at play; perpetrators know they will get away with it,” he says. “Life in our country has completely lost meaning.”

Then there is King Dodge, whose painting style mirrors that of Brush. Dodge has a painting that talks about the foundations of nationhood. He says that the Kenyan Nation was founded on falsehood. “The true fighters of freedom were shunted and power was taken by home guards and loyalists,” he explains. “That is why the Kenyan flag is upside down.” 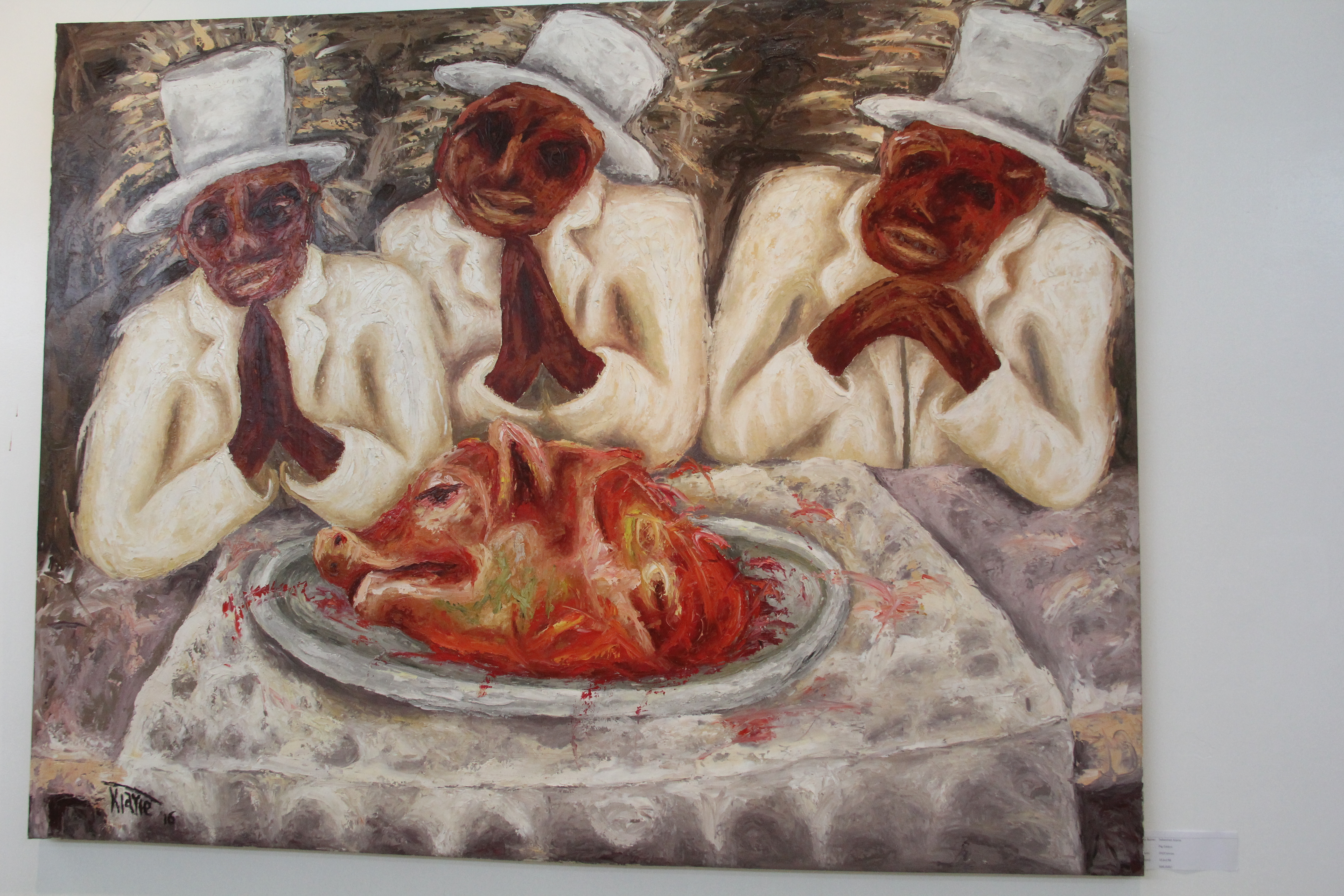 There are a total of 14 artistes from the Ngecha collective, who have taken part in the exhibition that ends at the end of the month. Notably missing from the exhibition were Sane Wadu, who now has his base in Naivasha and Shine Tani, who runs the Banana Hill Gallery.

With such an abundance of artistic talent one would assume that the Kiambu County Government takes good care of these artistes, after all they are a positive marking point for the county. Sadly, this is not the case. King Dodge explained that the county government has been aloof at best. “We’ve tried getting in touch with the county government to see how we can work together but we were taken round in circles; we eventually gave up on them,” he said. 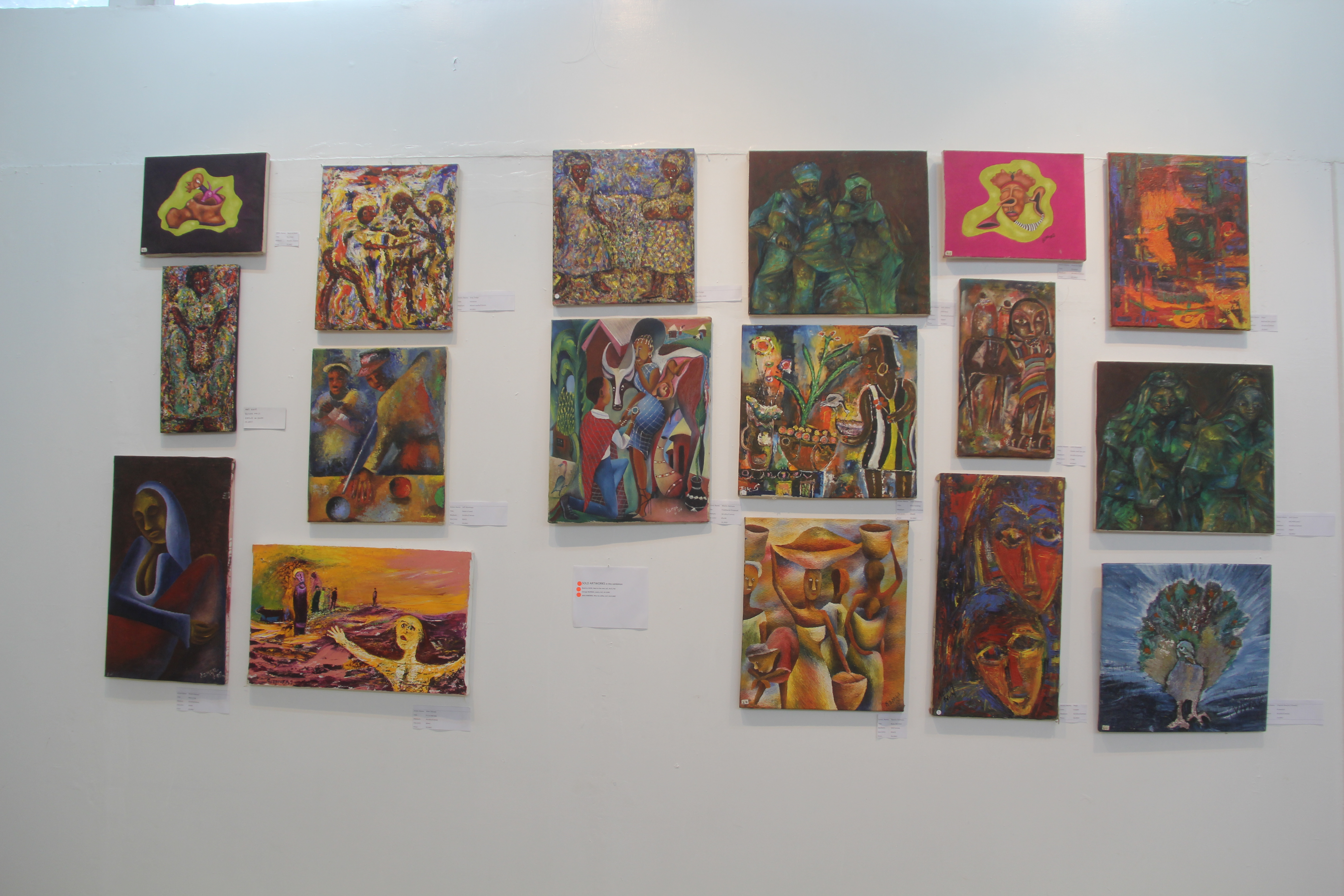 It is ironical that while the top leadership in the county is busy airing its smelly fabric in public, they have completely ignored this artistic village in Ngecha, which if well embraced, would catapult them to the top of the charts as it were. Yet, this is a county with a Cultural Officer under its payroll.

Meanwhile as the Kiambu County Government continues to bury its head in the sand, NMK knows too well the important place these artistes occupy in the country’s cultural heritage. This explains why they keep hosting them for exhibitions.

Lydia Galavu, the curator of the Creativity Gallery at the NMK says that the story of Kenyan contemporary art would not be complete without mentioning artistes from Ngecha. “The beauty of these artistes from Ngecha, who also include women, is that they live and work in the village,” she explains. “They are mostly farmers, which is their main source of livelihood. Their day to day existence is reflected in their artworks.”