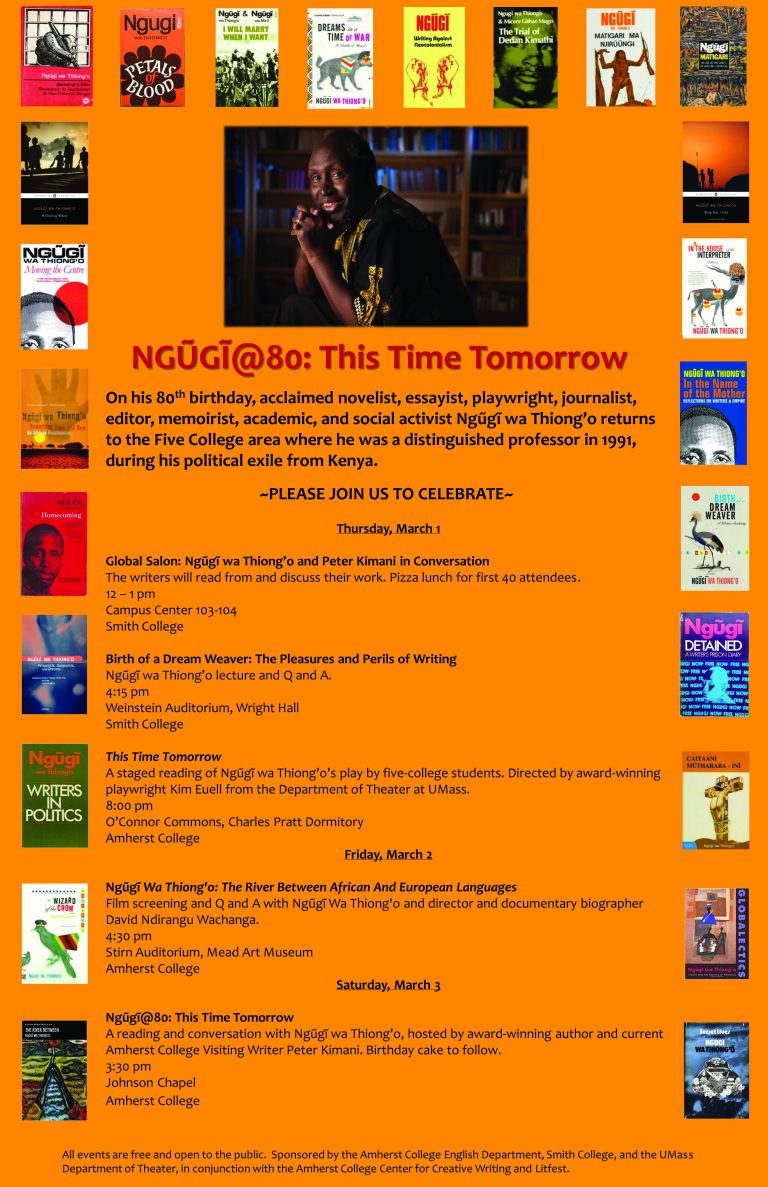 Prof Ngugi wa Thiong’o makes a homecoming, of sorts, when he returns to Amherst College—where he was based in the early stages of exile—in a three-day fest celebrating his 80th birthday.

He will be one of the star attractions at the Amherst Lit Festival, hosted by the top liberal arts college, and whose prominent Kenyan alumni include President Uhuru Kenyatta.

Ngugi taught at Amherst College in 1991, serving as a distinguished visiting professor of English and African Literature. His birthday celebrations will be between March 1-3.

The Kenyan journalist and author, Dr Peter Kimani, who is coordinating Ngugi’s event, is presently the Visiting Writer at the college. Kimani expects Ngugi’s celebration to springboard an assessment of his artistic legacy.

Kimani, whom many in the literary world consider to be Ngugi’s literary son, explained that the theme of the celebration, ‘This Time Tomorrow,’ draws from an old Ngugi play that contemplates the future of a widowed woman, who is rendered homeless after her slum home is overrun by city authorities.

“It’s opportune time for Kenyans and Africans to ponder: Where do we go from here? Where do we take Ngugi’s artistic legacy, ‘this time tomorrow’”? Kimani said, adding that Ngugi’s engagements as a socially committed writer and activist provide useful lessons for African writers.

“Ngugi’s decision to return to his roots, by championing African languages in late 1970s, was at the peak of his writing career. That meant his work suffered less immediate circulation, though not necessarily, less impact.

“But he received less external recognition, as Europe wasn’t going to reward someone seeking to end their cultural hegemony. He put his people and continent first, and that’s a useful lesson for us to postulate.”

The Amherst celebration will feature readings and discussions surrounding Ngugi’s life in writing. Most activities will be held at Amherst College, though Smith College, which is part of the Five Colleges incorporating Amherst, Hampshire, Mt Holyoke and the University of Massachusetts, Amherst, will host some events.

This includes Ngugi’s public lecture: “Birth of a Dream Weaver: The Pleasures and Perils of Writing,” reflecting on Ngugi’s evolution as a writer, a career that took off while still an undergraduate at Makerere University in Uganda in 1962 with the play, The Black Hermit. This will be on March 1.

That evening, Amherst College will host a staged reading of the play, This Time Tomorrow, directed by Kim Euell, an award-winning African-American dramaturg based at the University of Massachusetts, Amherst.

On March 2, Amherst College will also host a screening of a film, Ngugi wa Thiong’o: The River Between African and European Languages, directed by the Kenyan academic, Prof Ndirangu Wachanga, who is based at the University of Wisconsin in Madison. 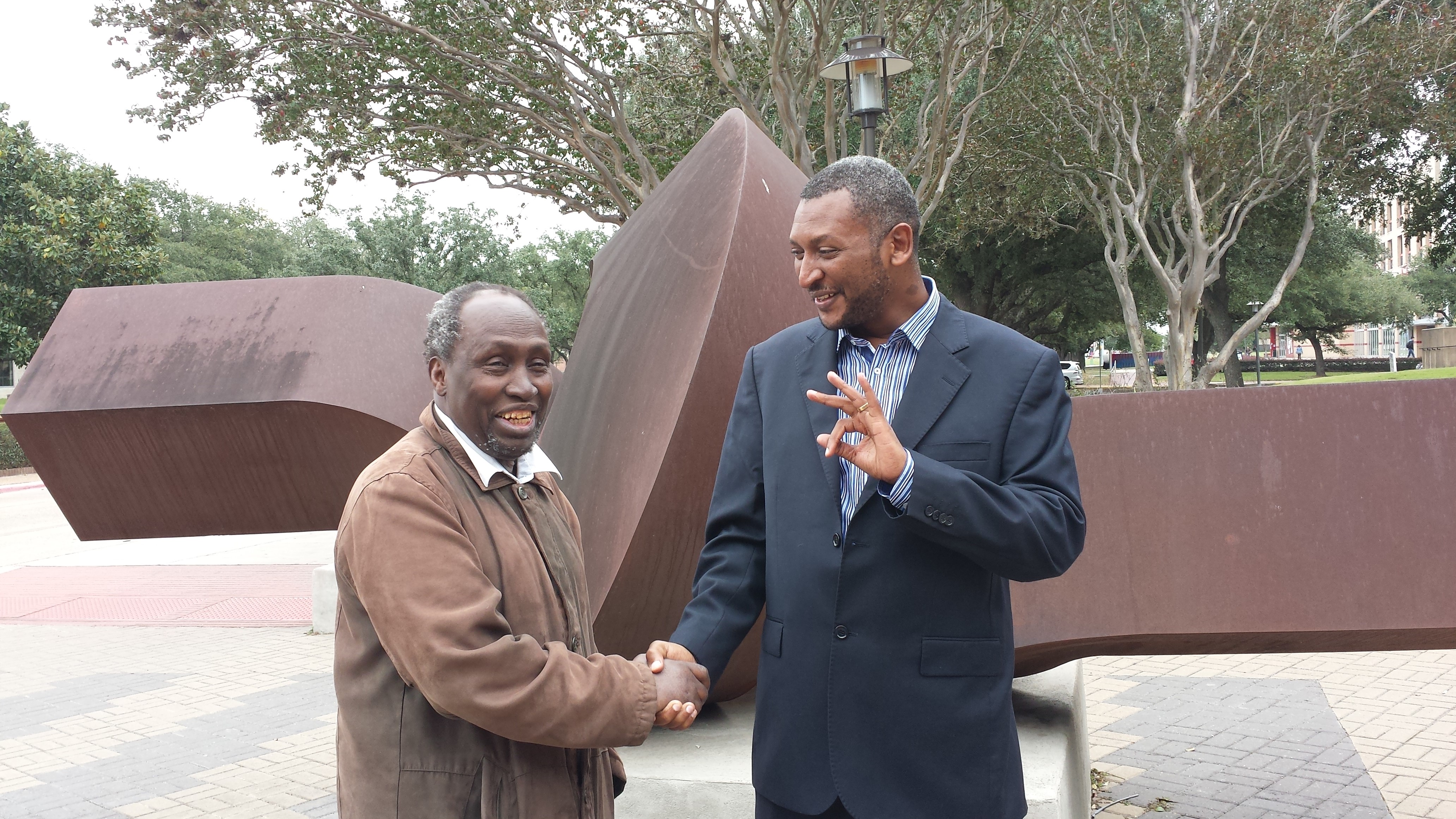 Wachanga’s work looks at the intersect of memory and the construction of national history. Over the past decade, he has documented the lives and times of leading Kenyan academics, including Ali Mazrui.

Ngugi will deliver the final reading the Amherst Lit Festival, followed by his birthday celebration, on March 3.

The month of March will prove busy for Kimani. He has a scheduled tour of London between March 10 and 17, to promote the British edition of his historical novel, Dance of the Jakaranda.

The book was released in New York last February, to great critical acclaim, including a New York Times Notable Book of the Year selection.

Kimani will give public readings and discuss his work at the University of London’s School of Oriental and African Studies, London School of Economics, and Cambridge University.

Other book events will be Daunts, the oldest independent bookstore in London, and Waterstones, the largest bookstore chain in Europe, where he will be in conversation with Fiammetta Rocco, the Books and Arts editor at The Economist.

Kimani will wrap up his mid-year book tour at the Calabash festival in Jamaica, hailed by critics as the best literary event in the world. Hosted at Treasure beach, south of Jamaica, the biennial festival is held on a beachfront. It’s free and open to the public.

At any given point in the weeklong fest, some 2,500 people sit in the audience, waiting to soak up a reading or performance!