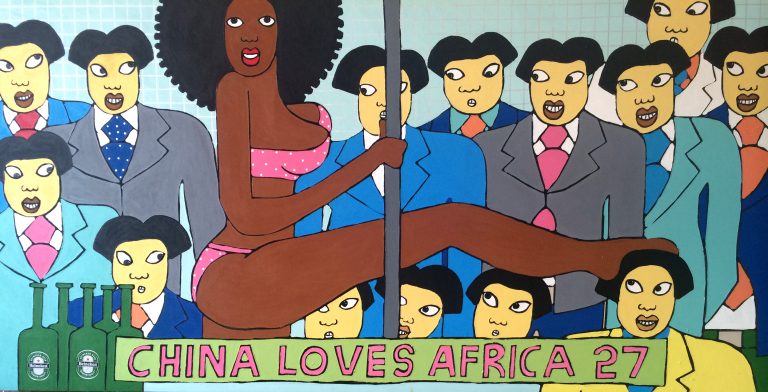 Book piracy and the Chinese connection

A few months ago visual artist Michael Soi, based at the Godown Arts Centre in Nairobi, found himself on the receiving end Chinese visit who felt that he was giving their country a bad name in spite of the ‘good things’ China was doing for Africa. The visitors had been in the delegation of the Chinese Prime Minister, who had been a guest of President Uhuru Kenyatta.

The bone of contention had to do with China Loves Africa, a series of satirical paintings poking fun at the duplicitous nature of China’s relations with Africa. Far from silencing Soi, the visit must have served as an incentive to spur him on. In his latest piece, China Loves Africa 27, done on September 30, Soi depicts a group of well-suited Chinese ‘gentlemen’ ogling the bikini-clad body of an African pole dancer.

The message of Soi’s art is that China is only interested in the ‘fundamentals’ of the African continent depicted as the body of a well-endowed African woman, and that the trade is merely the excuse for raping the continent’s resources. Africa is depicted in the unflattering light of a woman of easy virtue, hawking her ‘products’ to the highest bidder.

Conservationists have for some time now been complaining that China’s gigantic appetite for animal trophies is responsible for the dwindling population of wildlife in the country, especially elephants and rhinos. Publishers have now entered the fray and without mincing words are accusing the Asian giant of abetting Intellectual Property (IP) crimes by allowing pirates to print their books in China without carrying out due diligence.

Publishers under their umbrella body the Kenya Publishers Association (KPA) say that if the government does not check the activities of book pirates, the publishing industry, as we know it will be brought to its knees. Piracy is slowly but surely proving to be a publisher’s worst nightmare. Pirates target the fast moving books, print them illegally and flood them in the market at throw away prices, thus undercutting the original publishers.

Today, pirates are not only targeting the fast selling books but are also picking on any book that is guaranteed even modest sales and having them printed offshore, with China and India being the most preferred locations.

Publishers have for the longest time been howling in the wind with no one to listen to them. However things were different on Saturday September 27, when none other than the Attorney General graced the Wahome Mutahi Prize gala night, which is organised by KPA.

Seizing the occasion, Lawrence Njagi, the chair of KPA told Prof Githu Muigai how book pirates are threatening to wipe out the gains Kenyan publishers have made over the years. “If pirates are not stopped in their tracks in future we might not be able to congregate here to celebrate the efforts of writers,” he said.

Njagi urged the AG to oversee the crafting of stiffer penalties aimed at deterring Pirates once and for all. He called for the empowerment of the Kenya Copyright Board (KECOBO) such that it is mandated to clear all educational materials, including book, being imported into the country. “That way it will be easier to know who is bringing in what into the country,” he explained. “Pirates will think twice before shipping their containers of pirated books.”

Kakai Karani, who heads the anti-piracy committee at KPA, urged the AG to ensure that IP Crimes are elevated to the more serious economic crimes. “The current sh800,000 slapped on pirates is small potatoes to the big pirates who might have shipped in books worthy more than sh5 million,” noted Karani.

They must have been preaching to the converted for the AG promised to “fight the pirates living off your sweat.” He touched of the small matter of rebasing the economy – which had by then not been formally implemented – and explained that the intellectual property sector which previously not been factored in economic projections was now one of the pillars of the economy that catapulted Kenya to middle income status.

“I know, only too well, the heartbreak of having to stare at a blank screen for hours,” said the AG as he revealed that he has been attempting to write a fictional short story for the last ten or so years without success.

The import of his statement was that matters that affect the IP sector, like piracy, will be dealt with with the seriousness they deserve. No one wants Kenya slipping back to the low income strata.