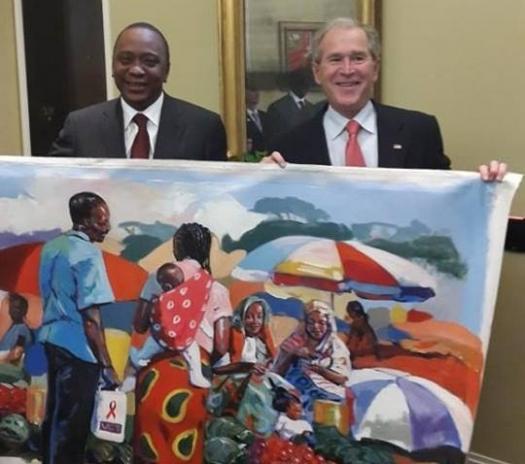 While President Uhuru Kenyatta was visiting the US, greater focus was, understandably, on the details of the trade talks as well as the fact that Kenya was trying to mend fences with Barrack Obama’s (Cousin Barry to some Kenyans) country, seeing as America’s ‘Choices have Consequences’ edict, in reference to Uhuru’s ICC case,  had pulled the two countries apart.

Focus was to later dramatically shift to President Kagame’s daughter (you know how that one went). Much later Uhuru was pictured in a Stetson – here in Kenya we call the godfather or godpapa – holding somewhat oversized American cowboy boots – gifts he was given by Texas cowboys, who also made him an honorary citizen. Although he eventually did visit George Bush Jnr – he of ‘you are either with us or the enemy’ – not much was said about a piece of ‘cloth’ the two were pictured holding.

Well, that piece of cloth was a painting Uhuru donated the former US president – don’t ask how they came to know each other, I don’t know either. Turns out the Uhuru appreciates art – Kenyan art to be specific – that he considered it important enough to give it to a former US president as a gift.

I did a little digging and realised that the painting is titled Ni hoja, lakini sio hoja (It is an issue but not an issue) – confusing huh? Well that is what artists do sometimes; confuse people – done by Patrick Kinuthia.

The painting, an acrylic on canvas, measuring 100 by 150 cm, features a couple standing before a group of women in an open air market. From the picture, it would appear like the man is trying to tell the woman, with baby strapped on her back something. The woman is either ignoring the man or is pretending not to hear.

From the picture is not clear whether the man and woman are a couple or not. Curiously though the man is clutching a package with the letters VCT clearly written on it. Could it be that the couple have just from a VCT centre? Who between, the man and the woman is saying the words ni hoja, lakini sio hoja? More importantly, why would they chose to have such a conversation in a public place.

Still, could the man be a health worker trying to convince the women in a market place to go and have their HIV statuses checked? Questions, questions and more questions. Incidentally, that is what a good artist is supposed to do; provoke your mind into thinking. And as they say, you take what you see in a piece of art. Hopefully, George Bush will have his own interpretation if he hangs the painting in his office.

William Ndwiga, the director of The Little Art Gallery says he received a call from the Kenyan ambassador to the US, asking for a ‘high value painting that can be displayed in a museum in the USA, for posterity’. He disclosed that the piece of art was bought for sh350,000 (approx 4,000 usd). “I see The Little Art Gallery running Art exhibitions by Kenyans in Kenyan embassies, around the world, to showcase what Kenya has to offer to the world. I have already started this process,” explains Ndwiga.

Kinuthia’s bio says his paintings ‘reflect both a freestyle approach as well as a disciplined observer of human and animal form behaviour’. Born in 1967, Kinuthia worked for Citizens Cinema Cooperation as a poster artist for its cinema halls, making scenery and portraits under the tutelage of Pakistani artist Mohammed Rafiq. Kinuthia is based in Banana Hill.