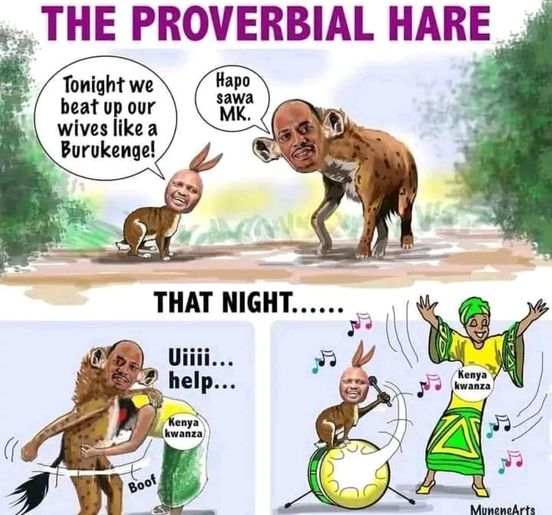 Gíkúyú mythology tells the story of the cunning hare that entered into a deal with the hyena to the effect that they beat up their mothers later that evening.
While it is not clear what wrong the two mothers had done to deserve such ‘punishment’, the two friends were nonetheless determined to go ahead with their dastardly plan.
Come the appointed time, hyena went ahead and gave his mother a terrible beating. Clever hare on the other hand, carried home some cardboard boxes (I am exaggerating here, but you catch the drift) and proceeded to bang them about.

Meanwhile, he had asked his mother to scream out, as if in agony, whenever he hit the cardboard boxes. That done, hare and his mother slept soundly till day break.
While the story sort of ended there, at least the version I heard, we can only imagine what transpired the following day.
Due to the heavy beating Hyena’s mother suffered, she might have found it impossible to wake up the following morning. However, at Hare’s homestead, the mother woke up fit and healthy, ready to face the day.
She even prepared nutritious breakfast for her son, all the time, exchanging knowing glances.
Such stories, mostly told to children, by their grandmothers, by the fireside, were meant to impart important moral lessons. This particular story counsels against blindly agreeing to any form of advice from ‘friends’. They might turn out to be malicious people who do not have your best interest at heart.
Now, this takes us to the curious friendship – if we might call it that – between Gatundu South MP, Moses Kuria and former Kiambu governor, William Kabogo. Both are supposed to have signed a cooperation agreement with the DP, William Ruto fronted, Kenya Kwanza coalition.
Now, the other day, Kabogo found himself in a shouting match – peppered with choice insults – with Kiambu Senator, Kimani Wamatangi, during a campaign tour of Limuru, in Kiambu County.
Kuria, Kabogo and Wamatangi are all eyeing the Kiambu governor’s seat, despite being in the same coalition. Of the three, Wamatangi clearly enjoys an upper hand, seeing as he is the one flying the UDA flag, which is Ruto’s party.
After the Kabogo/Wamatangi altercation, Kuria jumped to offer Kabogo a shoulder to cry on, as they both embarked on a lamentation tale, telling all and sundry how the UDA party has sidelined them. They also said very bad things about Mathira MP, Rigathi Gachagua, who is Ruto’s running mate, accusing him of engineering their troubles within the coalition.
They both swore to boycott Kenya Kwanza events until their ‘grievances’ are looked into. Meanwhile, Rigathi told them to go jump in the nearest sewerage pit.
The following day, Kabogo addressed a campaign rally in his Thika home ground, where he poured additional scorn on Rigathi and Ruto. On his part, Kuria booked himself a prime time slot with Citizen TV adding more fuel to Kabogo’s sentiments.
Media houses lapped this up predicting doom on the house Ruto built.
Just as Kabogo was basking in ‘their’ new-found notoriety as Kenya Kwanza bad boys, he must have been jolted back to reality when he saw Kuria happily participating in a Kenya Kwanza economic forum meeting in Nairobi. He followed it up with a rally in Nakuru.
That is when the penny dropped for Kabogo. Like the our friend the hyena, he had foolishly jumped on board Kuria’s plan to disrespect Kenya Kwanza and Ruto.
He is now out languishing in the ‘cold’, while Kuria, the hare, is having a swell time in the inner sanctums of Kenya Kwanza.
So, what is the game plan here? Well, only time will tell.
Meanwhile, the show goes on.