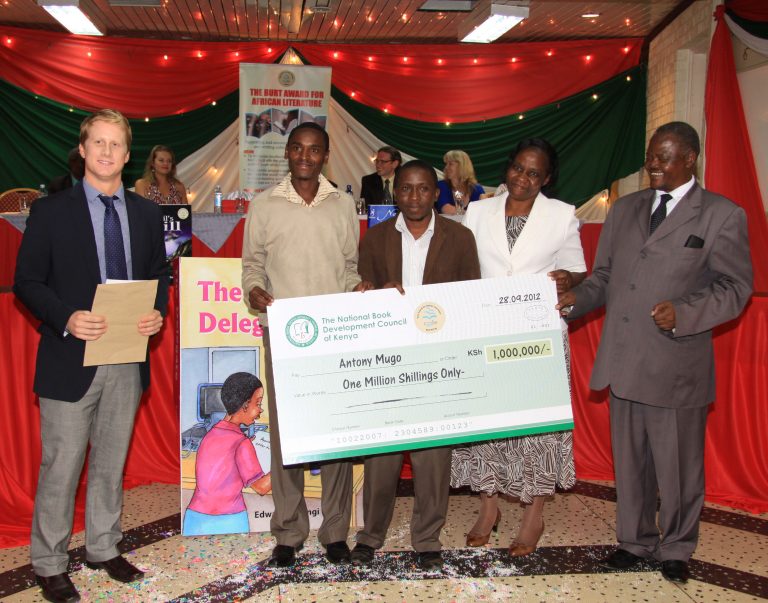 Anthony Mugo (center) receives a dummy check for Sh1 Million from Prof Chris Wanjala, that chairman of NBDCK (Right) and Mrs Ruth Odondi, the CEO of NBDCK. At left is Geoff Burt, son of Bill Burt, who graced the occasion.
EventsIssuesNews

Anthony Mugo is probably the richest author in Kenya today. On Friday evening he won Sh1 million in the inaugural Burt Award for African Writing. The Burt Award, administered by the National Book Development Council of Kenya (NBDCK), is the richest literary award in Kenya’s history. His manuscript titled Never say Never has been published by Longhorn Publishers and is out on sale.

The Burt Award is a partnership effort between NBDCK and the Canadian Organisation for Development through Education (CODE), with the support of a Canadian patron Mr. Bill Burt, after whom the prize is named. The award is aimed at encouraging authorship as well as a reading culture among Kenyan children.

37-year-old  Mugo, who until July was a credit officer with a micro finance company says writing is not new to him. “I have been writing for the last twenty years only that I have never been published,” he explains. In 2009, he participated in another NBDCK organised writing competition, where he won with his manuscript Too Innocent to Die. In 2010 he again participated and emerged victorious with another manuscript, Not a Drop. Mugo, who is married with two children graduated from Moi University with a BA in Economics.

Coming in at second position was Edward Mwangi, who took home Sh500,000. His manuscript, The Delegate, was published by Moran Publishers and is also on sale. The 32-year-old, who has just completed his MBA from Nairobi University, works as a general manager for an engineering company in Nairobi. Mwangi, who is also married with two children says his perseverance has finally paid off. “Every morning before I start working, I write for an hour and another hour after work,” he explains.

In third position was Ngumi Kibera, with his manuscript titled The Devil’s Hill, which is published by Longhorn. Mr Ngumi, who is an established author, won Sh250,000. He is not new to winning; His other book, The Grapevine Stories, a Collection of short stories, won the 1997 edition of the Jomo Kenyatta prize for Literature.

Ngumi is full of praises for the Burt Award saying that it is a timely effort that will take Kenyan writing to the next level. “There is a lot of writing talent in Kenya only that our publishers are not aggressive enough to tap them,” he said. “The fact that there were 400 submissions for this prize is testimony of raw writing talent out there waiting to be discovered.”

Also present during the awards ceremony, held at the Silver Spring Hotel,