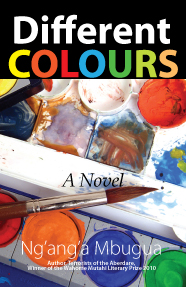 It would appear that matters to do with environmental conservation occupy a special place in Ng’ang’a Mbugua’s world. Yet, it is these conservation matters that fire his creativity. His last two books have all focused on environmental conservation as their central theme.
And while these issues might appear boring and the least likely subject of a novel, Mbugua has nevertheless breathed life into these otherwise mundane issues and crafted interesting stories around them.
Call him an NGO novelist, an environmental crusader/activist, and any other such names but the fact of the matter is that Mbugua’s books are immensely readable. This is a refreshing departure in an environment where captivating Kenyan writers are few and far between.
Mbugua’s foray into ‘environmental writing’ started with his book Susana the Brave, a primary school reader that talked about a teacher, who after being posted to a school in an arid area, went ahead and transformed the place due to her dedicated campaign to plant trees.
His second book, Terrorists of the Aberdare, addressed the delicate issue of human wildlife conflict and by extent, forest conservation.
And for his troubles Terrorists won the third edition of the Wahome Mutahi Literary Prize. The book was also short listed for the 2011 edition of Jomo Kenyatta Prize for Literature.

His latest book, Different Colours, and which I think is his most ambitious so far, has taken the game a notch higher. Not only has he written on his pet subject, he has fused it with the sublime world of Art.
Different Colours revolves around an imaginary waterfall in an equally imaginary Banana County, which is threatened by an unscrupulous merchant who starts to mine building stones from around the waterfall. The hero of the book is Miguel, a dreadlocked artist – don’t they all sport dreadlocks? – who, after hearing of the beauty of the waterfall decides that he must immortalise it on canvas.
It is while on one of his surveying missions that he accidentally bumps into a group of men hard at work in a secret quarry. The story unfolds after the owner of the secret quarry is alerted of Miguel’s nosiness.
Not that Dik Teita (note the play on the word dictator) hadn’t had his fears as to the ‘real’ intentions of the newly arrived ‘rastaman’. The moment he got wind of Miguel’s mission of painting the waterfall – word travels fast in Banana – he feared it was a matter of time before his secret quarry was discovered.
To prevent this, Dik Teita comes up with what he thinks is a convenient smokescreen; make Miguel paint the local cattle dip – who, in their right minds assigns such jobs?
Seeing as the cattle dip ruse didn’t work, Dik Teita resorts to intimidation and threats of violence. And who better does this dirty work than Vu Tabangi (bhang smoker) the village thug. Sadly for Dik Teita, the threats have the opposite effect on Miguel: his resolve to save the waterfall from destruction hardens. Together with Angela, a widow who also happens to be his landlady, they mobilise the local community on the importance of conserving the waterfall, which is their lifeline. They also enlist the services of Derek, Miguel’s friend, who is also a tech geek. Derek also has contacts in media.
Meanwhile, the noose tightens on Dik Teita and his goons. It also emerges that Dik Teita was behind the death of Angela’s husband.
While the waterfall conservation saga is engrossing I found the parts dealing with Miguel’s art most appealing. It is either that the author is an accomplished art connoisseur or that he had done thorough research on all that entails art, paintings and other forms of visual art.
Whatever the case, the informed discourse on art really uplifts
Mbugua’s book.
In Different Colours, art meets nature, and it is in the appreciation of the beauty of nature that Miguel’s talent and eye for detail enriches the conservation narrative.
Due to their unconventional behaviour society tends to misunderstand artists. Most of the times artists are seen as misfits. And Miguel was no exception; in one classic moment, Miguel is told that people come to the waterfall to commit suicide. “It is a good place to die,” he says more to himself, probably after being overawed by the beauty of the falls.
Throughout the book, the author teases romantics with the probable love affair blossoming between Miguel and his widowed landlady. Even at the end of the novel, he only hints at what might come between the two.
This book, in my view, is a fitting tribute to the late Nobel Laureate, Prof Wangari Maathai. Your work, Mama Miti, was not in vain.