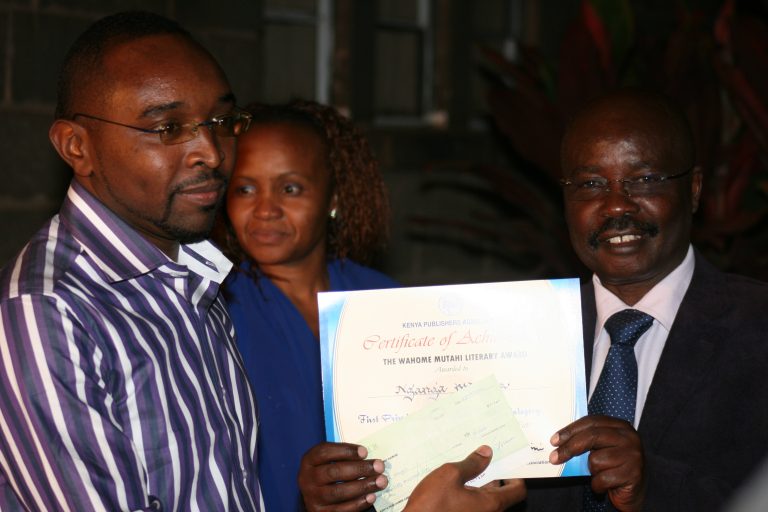 Ng’ang’a Mbugua’s novella, Terrorist of the Aberdare has won the third edition of the Wahome Mutahi Literary Award, while John Habwe’s book Cheche za Moto won the Kiswahili category of the same prize. The awarding ceremony was the highlight of the 13th edition of the Nairobi International Book Fair.

An elated Ng’ang’a Mbugua, who is also the chief sub-editor of Daily Nation, says that the win has vindicated his edition to self-publish the book. “I presented the manuscript of this book to several publishers and they turned it down,” an elated Ng’ang’a told Maisha Yetu. “Since I had faith in the book I formed Big Books, took a small loan and published the book.”

Ng’ang’a’s example shows that there is indeed life after publishers slam the door on a writer. I can imagine how the publishers who rejected the manuscript felt after Ng’ang’a stood to receive his prize. “Were we that blind?” they must have been asking themselves. And what does this say about the judgment of publishers who were given the chance to publish this book, and they rejected it? Should we start questioning their competence?

How many more potential winners are publishers sitting on? not to mention the ones they have rejected?

You might be wondering what Terrorist of the Aberdare is all about, whether it has anything to do with America’s old enemy, Osama bin Laden. Having read the book I can assure you that it has nothing to with Osama’s brand of terrorism. It talks about a different kind of terrorist: it is about elephants that cause havoc to farmers’ crops

These elephants leave the park and come to destroy farmers’ crops. Apart from that they also kill farmers who stand in their way. In Ng’ang’a’s book the victim of the elephant’s terrorism happens to be one Sonko Wakadosi, who was dispatched to his Maker by a rogue elephant. The author manages to address the serious issues of human wildlife conflict and environmental management by employing humour.

For the last few days Kenyans have been riveted by the exploits of one Mike Mbuvi ‘Sonko’, who trounced ODM’s Reuben Ndolo and PNU’s Dick Wathika to clinch the Makadara parliamentary seat in Nairobi. While talk about Sonko (rich man in Sheng) has revolved around his seemingly endless riches, the Sonko in Ng’ang’a’s book is dirt poor, and whose hope of striking it rich was through the sale of the cabbages so beloved of the elephants.

For his trouble Ng’ang’a takes home Ksh50,000 (625USD). But for Ng’ang’a money is the issue. it is about the recognition that comes with the win. “I plan to ride on the publicity generated by the win to really market my book,” says Ng’ang’a, whose company has already published a short story The Last Kiss, which is doing relatively well in the market.

Even before the award Ng’ang’a says that Terrorist of the Aberdare has done well in the short time it has been in the market, and that he has managed to recoup the money he invested in publishing the book.

The first edition of the Wahome Mutahi Prize was won by Onduko bw’ Atebe’s Verdict of Death, in 2006, while activist Okoiti Omtata’s play Voice of the People, won the prize in 2008.