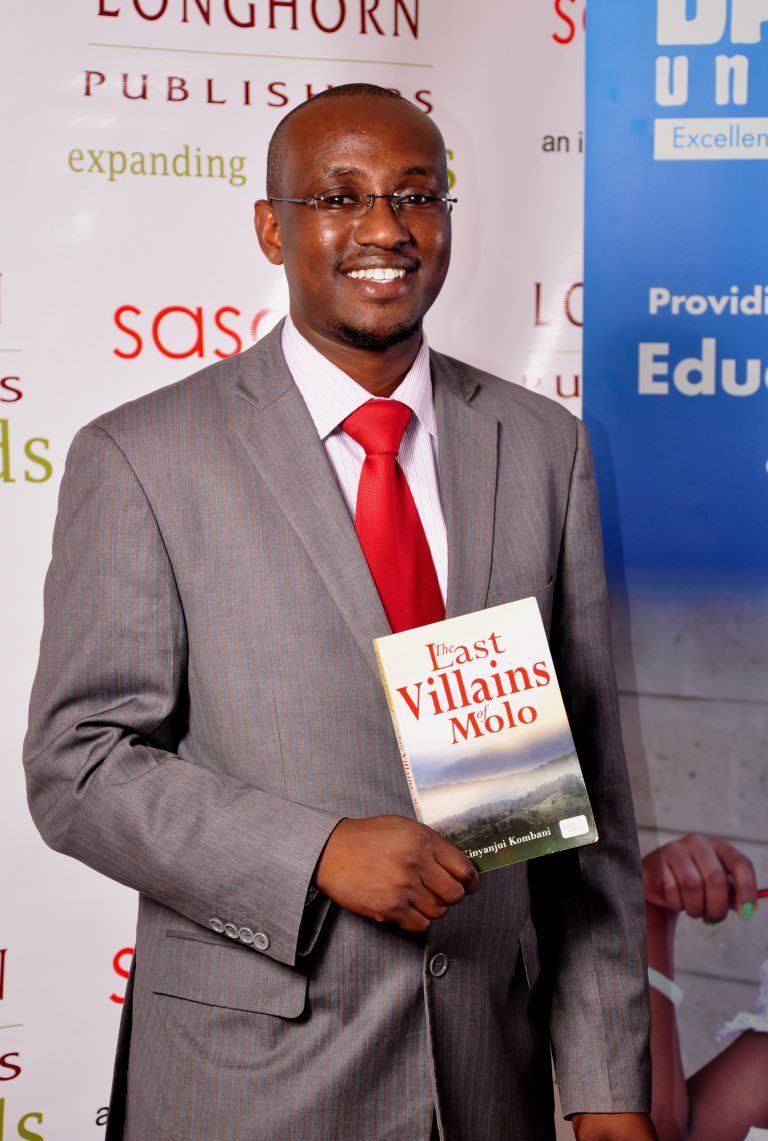 Kinyanjui Kombani and his journey as a writer 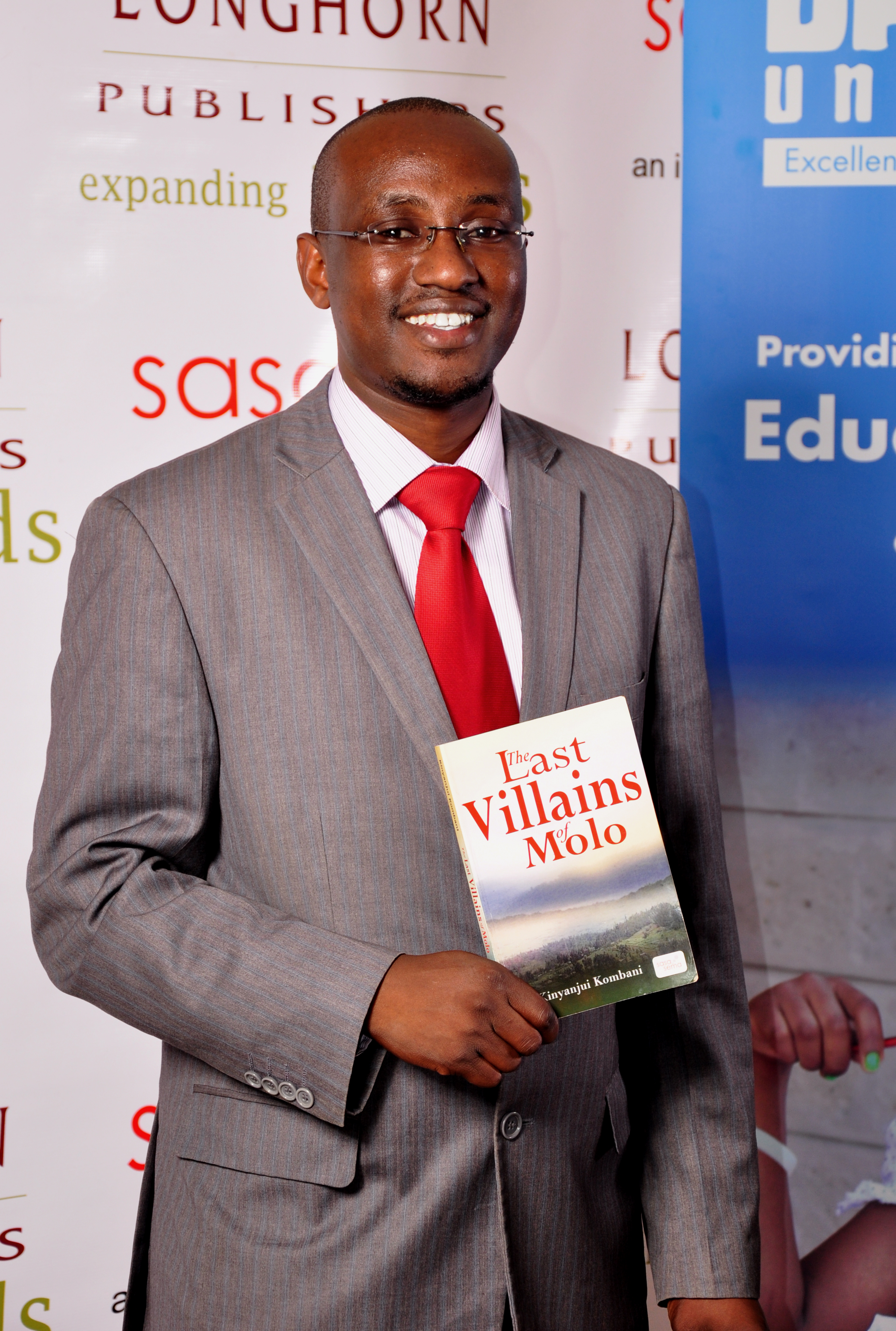 Maisha Yetu: Describe your best moment as a writer

Kinyanjui Kombani: The relaunch of The Last Villains of Molo in September 2012 at Daystar University, Valley Road Campus. The story of ‘Villains’ is another novel altogether. It was written in 2002 and I promptly signed the publishing contract. Sadly, I had to wait six years before it was published. Even then, I did not receive any royalties, so I moved over to Longhorn Publishers. The launch in 2012 was a culmination of 10 years of waiting, and it was my best moment.

MY: Describe your worst moment as a writer.

KK: It must be when I discovered that I could not earn much from The Villains See, when the publisher agreed to do it, I knew I had crossed the poverty line – I even went to a car showroom to enquire about the price of my favourite car (Landcruiser VX). So after a year of sales, and not a cent to show for it, I was very let down. It nearly killed my writing dreams. It hit me so hard that I did not finish my second novel until last year.

MY: Where do you find time to write given your busy schedule

KK: A technique I learnt from writer Anthony Gitonga is to split my writing into manageable pieces. If I am writing, say, a 40,000 word novel and I have two months to do it, I know that I have to write about 1,000 words a day. Once I set this target I commit to it. Sometimes I sway, though!

I write mostly in the early mornings, and evenings. Last year I spent the entire Easter hold up in my private office writing some books for the Uganda market. I nearly collapsed, and I vowed not to try such stunts again.

MY: What inspires your writing/ who are your role models

KK: Locally, I have been inspired a lot by the writing of Meja Mwangi (I read Little White Man then I was in primary school and I have never read a more intriguing book. I have read ‘Cockroach Dance’ so many times my copy is dog-eared). I think Meja has the biggest influence in my writing.

Sam Kahiga’s book Paradise Farm has had the biggest impact on me. One of my future plans is to write a modern story along the same theme.

Internationally, I’d say Sidney Sheldon. Sidney’s work have  a way of telling stories of many different characters who seem un connected to each other, until the end of the story when all the pieces come together. You will see that kind of influence in my new novel Den of Iniquities.

MY: “Villains” has put you on the Kenyan literary map; describe your journey with the book – from the beginning – what message you intended to pass. Juxtapose that with activities in the Kenyan social media – the latest tribal battleground.

KK: The journey towards ‘Villains’ is very much like my life. Our actual home is in Njoro, and my grandmother had given refuge to a family that had been displaced during the 1997 clashes. The patriarch of the family – one Mzee Joseph Mbure – used to tell us stories of the 1991/2 Clashes in the Kamwaura area of Molo. In campus, I wanted to write a short story based on the clashes. I did more research and before I knew it, I had a novel.

Initially, I just wanted to tell a story. I have always been intrigued by ‘Rich girl, poor boy’ stories and I wanted to tell that too. So I built the two stories together. When I did more research and interviewed more players in the Molo conflict, I realised that there was a bigger role to play. Negative ethnicity was real, and I could use reconciliation as a message for the youth.

Sadly, the Kenyan Social media scene has become the next battleground. We did not physically fight in 2007, but the fragmentation that was in society was deep set – if the tribal sentiments on social media are anything to go by.

MY: It has been said that you are the hottest young writer in Kenya today…

KK: Wow! I don’t know who said that, and what the context was, and who I was being compared to! So I cannot say anything to that claim! I must say that God has been good to me – the fact that Villains is one of the fastest selling Kenyan novels is a true blessing. Last weekend I was at Text Book Centre Thika Road Mall, and I tweeted that copies of ‘Villains’ have been replenished. I was called by the book centre’s management just a few hours later to have my publisher deliver more copies – they had been sold out. It is a blessing.

MY: In your words, what ails the Kenyan writing scene – are we headed in the right direction?

The only issue I see is that a lot of young writers do not know what to do once they have their manuscript ready. A lot of them think that they should look for money to pay publishers to get the book done for them. This situation can be reversed if our universities work on creative writing programmes that do not end just with submission of a finished piece of work, but with tips on getting published.

I think we are headed towards the right direction. ‘Authors Buffet’ a forum where 14 authors and publishers got together  in May to spend time with their readers and the general public, was very well received. (We are doing ‘Authors Buffet 2.0 in September at the Nairobi Book Fair).

After this event, we have laid plans to start a creative writing course, complete with tips on getting published, at Daystar University. I am happy that writers John Sibi-Okumu, Bonnie Kim, Jennifer Karina, Anthony Gitonga, Stephen Kigwa, Mbugua Mumbi, Winnie Thuku, and Nganga Mbugua have accepted to co-facilitate the program.

MY: Describe your upbringing, education and family.

KK: This is another novel altogether! I grew up in Molo in Nakuru and went to Molo Academy from Nursery to Form Four. I was the last born in a family of 5. My upbringing was very humble. Our mother was a single parent, and two accidents literally crippled her. My education from Std 8, when she was completely unable to fend for us, was paid for by a kindly family friend. It was not easy growing up in Molo, especially because Molo Academy was a school for the fairly well-to-do. I remember that we could not afford shoe polish, and to avoid getting into trouble we used the soot from our beaten tin lamp. When asked why our shoes always had a dull coat, my elder brothers taught me to say that the polish came from our cousins in the USA and that is how the polish there looks like!

I worked hard to help my family get out of poverty. Unfortunately, my mother never got to see the fruits of her hard work – she passed on when I was in form 4. I never recovered from this loss and when we moved to Nairobi – Ngando slums, I lost all ambition in life. I used to play ‘pool’ from 8 am to midnight. When I was called to Kenyatta University for a degree in Education – English and Literature, I was reluctant, and I only accepted to go when I discovered that the university had common rooms with dozens of pool tables.

My life changed when I met Mr. David Mulwa who ignited my writing flame. I also enrolled to the Kenyatta University Travelling Theatre. By the time I was leaving in 2004, I had climbed the ranks to be KUTT’s longest serving Executive Director.  A year after graduation, during which I worked as a casual officer at the Culture Week secretariat, I joined an international bank as a clerk. Having performed several roles in the bank, I am now a Segment Trainer taking care of the learning needs of the branch distribution network and contact centre.

I have also received certification as a business mentor with Inoorero University.

I currently live in Nairobi with my wife of 7 years, Alice, our two kids, ‘Malik’ and ‘Nimu’ and Steve, a nephew.

MY: West Africans (Nigerians) and South Africans have been beating us of late. Aren’t we good enough?

KK: Again, I don’t have statistics, so I am not able to comment on it. I think that with initiatives such as Authors Buffet, StoryMoja Litfest, Kwani Hay Festival, Kenyan writing will go to very great heights.

MY: Who is to blame between writers and publishers?

KK: I think writers and publishers need to stop pointing fingers at each other and start selling books! Publishers need to add some marketing budget towards promotion of works of fiction. Writers, on the other hand, need to be at the forefront in promoting their books. It is in their best interests to make sales of the books!

I have a good relationship with Longhorn Publishers, and it is because I have taken the initiative to ensure my books are available and people know about them. I also do the physical sales of the books. Last year, two weeks before Longhorn released my children’s book ‘Lost but found’, I had already sold 600 copies in my workplace alone. The book sold out in two weeks because I took the campaign to Facebook and Twitter.

I also got into a strategic partnership with Tuskys Supermarket for distribution. In addition, I worked with FunkyKids Retro Store at Prestige Plaza to give a gift of the book to select shoppers. What I am saying is that the publisher will release the book, but it is the responsibility of the writer to convert it to sales!

MY: Tell us about your new book and how long it took you to write it.

KK: My new book is tentatively called Den of Iniquities and should be released in September 2013. Unlike Villains it is 100% fictional though loosely based on police extrajudicial killings in Kenya. It gives the story of 3 individuals whose lives are very different, but come intertwined in a chain of unfortunate events. It is a ‘What If’ story inspired by the Philip Alston report on police killings in Kenya.

Den of Iniquities is a story 8 years in the making. I gave my mentor – David Mulwa of Kenyatta University – a short story for my creative writing class and he kept on prodding me to finish it. I had stopped writing following disappointment with my first publisher. The story was cooking in my head all the time, so I wrote it in one month last year.

MY: List all the books you’ve written so far.

I also did a play Carcasses that was commissioned by the Born Free Foundation for their bush meat awareness project. The play was later shot to film as Mizoga which has been screened in the US, UK, and 5 African Countries. Last year I wrote a yet-to-be-released series of 12 children’s stories for the Uganda market.