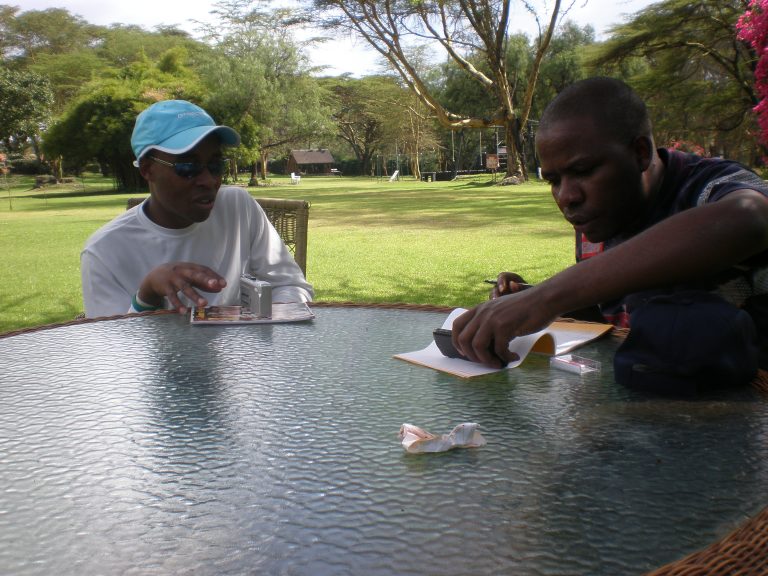 Writing the story of Henry Wanyoike

This story first appeared in the premier edition (July – September 2010) of The Kenyan Runner, the one that had David Rudisha on the cover – ha, I had to say that – It has since changed names to Runners Magazine.

When he got blinded in 1993, Henry Wanyoike had no idea which direction his life would take. Not that he had much of a life anyway. He had just finished his Form Four studies, and not having performed well, he had taken up a job as a lowly village cobbler.

Well, he had an ace up his sleeve; he sure could put his legs to good use, and boy could he run? Sadly, with his sight gone there was no way he could run, right? Wrong. Wanyoike is today one of the most celebrated blind athletes in the world. Not only is he a multiple Olympic gold medalist, he has also shattered a number of world records in long distance running.

The best part of it however, is that through his efforts he has helped restore the sight of close to 20 million people worldwide, who would have otherwise been blinded by preventable cataracts.

Through the Greatest Race on Earth, sponsored by the Standard Chartered Bank worldwide, Wanyoike participates in all their charity runs and raises funds to help rehabilitate those with cataracts. Not to mention the numerous charity efforts his Henry Wanyoike Foundation does for the less fortunate in the Kenyan society.

Well, for someone with such a massive profile, it was only natural that the story of his life be told in book form. Well, it all started with a conversation with a friend of mine, who had gone to high school with Wanyoike. That was around the time he made history by winning his first Olympic gold medal at the Sydney Paralympic Games, in 2002.

Then, I was a journalist with the Sunday Standard, where I penned his first ever full-length profile. Naturally after that our friendship grew, just as his achievements on the track. When in 2007, I suggested the idea of me writing a book about his life, there was not much objection.

And being in good terms with most publishers in the country, I had no problem getting one who would publish the manuscript. Not only did the publisher agree to the proposal, the also agreed to fund a four-day retreat in an exclusive resort in the Rift Valley, where the bulk of the interviews were done.

The release of the book coincided with the 2009 edition of the Nairobi Standard Chartered Marathon, where we sold a decent number of copies, to readers who also had the good fortune of having the book signed by Wanyoike and his guide.

Plans are underway to sell rights for the book internationally as well as making it available online. Next stop: Doing a movie out of the book, and suggestions here are welcome. Royalties realised from the sale of the book go towards the Henry Wanyoike Foundation.