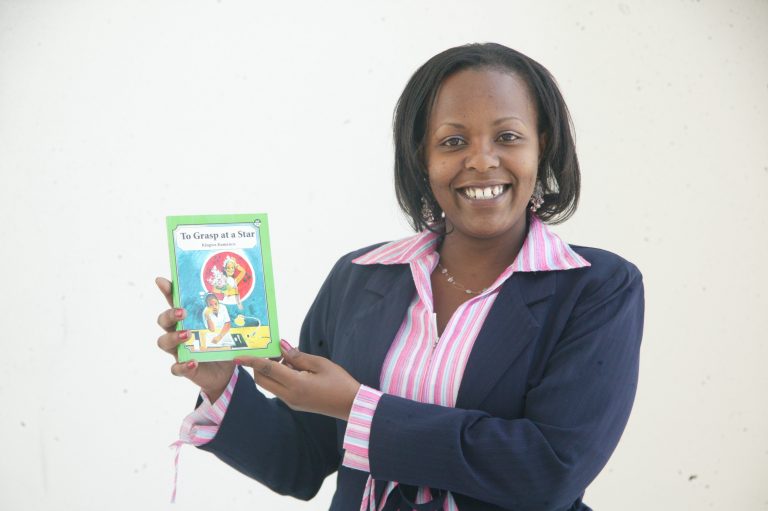 The author holds a copy of her book
Personalities

As a first year Literature student at the University of Nairobi Kingwa Kamencu took up the challenge by the National Book Development Council of Kenya (NBDCK), to come up with a manuscript for a novella, and won the second prize and Ksh35,000.
That was in 2003. The same novella, now in the form of a book – To Grasp at a Star – won the youth category of the Jomo Kenyatta Prize for Literature, Kenya’s most prestigious literary prize.
An elated Kingwa says winning the prize is enough testimony that her writing can actually compete with the best in the country. Looking back at the manuscript she wrote as a student, she says at the time she not quite sure it would be among the winners. “I nevertheless submitted the manuscript and hoped for the best,” she recalls.
“At that time in campus I decided to write so as to overcome the disappointment of losing in student leadership elections,” she says.
During the awards ceremony, she got to interact with many personalities in the literary world, some of whom she had only read about in her Literature class. However, one individual was to make all the difference.
In the gathering was Barrack Muluka, who was then the managing director of East Educational Publishers (EAEP). “I talked to him and he asked me to submit the manuscript for consideration at the company,” says Kingwa her face lighting up at the recollection.
She wasted no time. The event was held on a Friday evening and by Monday morning an excited Kingwa was knocking at EAEP’s offices in Westlands.
Then the good news came. She was informed that her manuscript had passed the publication test only that they wanted another novella of the same length. Luckily, for her she had written one.
Her dream of being a published author was finally realised when she was in third year. To Grasp at a Star was finally born. She says that after the book was published, there was so much excitement both from her family members and university colleagues.
“My university lecturers were very proud of me. They held a launch for me at the university and even adopted the book for use in children’s literature,” says the only girl in a family of boys.
That was just the beginning for what was to be exciting times ahead for the book. When the Kenya Publishers Association announced that they were introducing the Wahome Mutahi Literary Prize, in 2006, in honour of the late humourist, EAEP entered Kingwa’s book for the competition.
She was pleasantly surprised when her book took third position behind Stephen Mugambi’s book Wait for me Angela (Kenya Literature Bureau). Onduko bw’ Atebe’s book The Verdict of Death, also by EAEP took the overall prize.
During this year’s Jomo Kenyatta Prize for Literature Awards, To Grasp at a Star won the overall prize in the youth category, beating Ken Walibora’s book Innocence Long Lost (Sasa Sema) to second position. Meja Mwangi’s book Boy Gift came in third.
The judging panel led by Prof Emilia Illieva of Egerton University was full of praises of the book.
“Kingwa Kamencu tells immensely interesting stories of young female adults who, under the impact of illusive ideas of success and glamour, get caught up in dangerous situations that nearly jeopardise the bright future they so much deserve by virtue of their outstanding qualities,” said Emillia.
Kingwa, who now works as a writer at the Media Institute, finished her undergraduate studies in August last year, where she graduated with First Class Honours. She is currently pursuing a Masters degree in Literature, a scholarship she got from the university.
She has attended various courses on writing including British Councils’ Crossing Borders programme. She has also volunteered during the Kwani Trust organised Litfest held in December last year.
She however thinks that more needs to be done to improve the literary situation in the country. “Writers need to be more serious in their writing and publishers need to market their products more,” she says. “Otherwise we will keep moaning about a poor reading culture forever.”